Leaving Coeur d’Alene and heading through the rest of Idaho, 20 miles and on to Spokane. Both of John’s parents grew up there before meeting in Seattle at the University of Washington. It had been so many years ago that we took a pass on visiting old home sites and golf courses where John had his first lesson and headed out into what is called the Inland Empire of Washington state. We have to admit it was more like the midwest. We hit a stretch of highway where the planting fields were actually labeled so we could tell what was growing. We would guess what it was until we saw the sign and could tell if we learned anything.

As we got towards the Columbia River, 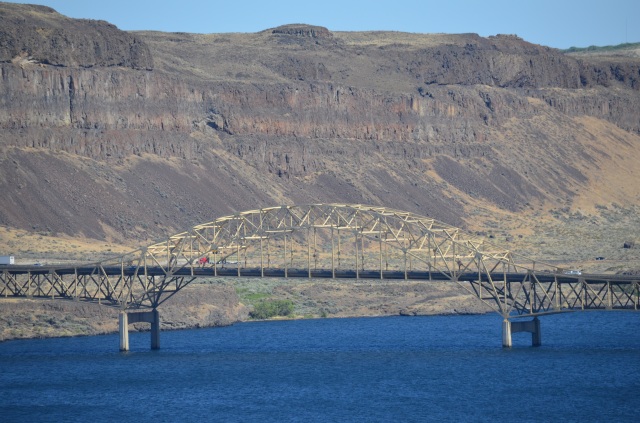 John talked about the Gingko Petrified Forest, which he and his family would stop at when traveling between Seattle and Spokane. The building was as John remembered and we took a tour of the museum and engaged in a conversation with the Washington State Ranger managing the facility. We discussed dates of the town of Vantage, where the park was located and she described the “Ice Age” process that left the petrified forest behind and the gorge which the Columbia River flowed through. She also told us about the Washington State Camping Park system and mentioned the one about 5 miles south of her museum. We were going to travel farther towards the Cascade Mountains, but decided to try the local park. 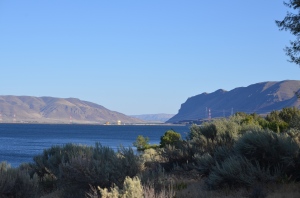 They had full services, for you non-RV campers, that is electric, water and sewage dump. (Wish it could be described better! Oh, it is “Full Service”). As we approached the camp, it looked like an oasis in the brown desert graces. There were tall trees that protected the area from high winds. The only sign that bothered us was a no walk sign in an area because of rattle snakes. We found a camp site that looked over the Columbia River and settled in for the evening.

A rum and diet coke toast to the park followed by a great hamburger and it was to bed for the night. The great news was that it was a clear shot at the satellite worked for a few minutes of TV and catching up on the news of the world, a few minutes was all we wanted!

Morning took us out of the park on our way to Seattle. It was fun to get up and through Snoqualmie Pass where John learned to ski starting in first grade. Down the other side and we made our way across Mercer Island, one of John’s home locations and over Lake Washington into Seattle. We wanted to go down to the fish market at Pikes Place and found a good spot to park.

It was only 9:30 so the crowds had not hit the “tourist area” yet. We stopped in the Old Curiosity Shop, that John had gone to as a Cub Scout. Do things really change or was it always a tourist trap!!! There is even a Ferris Wheel. 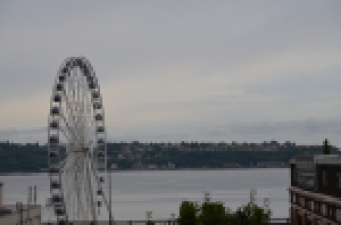 We walked along the shops in front of the piers and finally decided to climb the stairs to the Pike Street Market. It was like climbing a mountain, just kidding, but a long up hill climb.

We headed into the market, the sales people at the fish market were throwing the big salmon

We then were too early for lunch, but wanted to go to Lowell’s, which was a favorite place that we would take John’s mother to meet an old family friend Mavis Leyrer.  Her children grew up with Carol, Will and John on Queen Anne Hill.  We had some chowder, it was fantastic and then headed back to the fish market. The flowers in the market were gorgeous.

We called John’s brother Will to see if we could bring some Salmon for dinner and he said no, he had it all arranged for Saturday night dinner and they already had chicken for that night.

As we had mentioned in our Montana blog, we had to pick a part up in the area to fix the RV. We stopped, it was not in yet so we requested a good wine store that we could spend some time at. We were directed to the Wicked Cellars. We met the owner and had a fun time learning about different Washington State wines. We bought 4 bottles and headed back to get the part for the RV. We picked up the part and headed for the Whidbey Island ferry in Mukilteo (We had to use the name!) We arrived at Will and Cathy’s about 5:30, he was kind enough to point out that it was cocktail time,(Thank God, it being 8:30 at home, we thought we may have missed it!) so we enjoyed some wine and then a wonderful chicken salad dinner.

In the morning, we cleaned the RV and Janice

went to work replacing the part. All went well and the vehicle was good as new. We went to the fish market, not quite accurate, it was a truck and trailer outside the grocery store where you could get fresh seafood. Will picked up some beautiful salmon and muscles for dinner that night.

Will and Cathy invited John and Mary Hoverson, John was a childhood friend of John’s growing up in Seattle and had been at Kansas University and a fraternity brother of John’s good friend Mike Baxter from high school in Topeka. Mike and his lovely wife Kathy live on Amelia Island 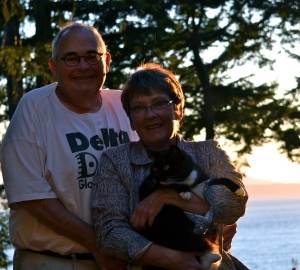 just north of us in Florida. Will’s son Stephen and his wife Lauren came out from Seattle. We had a wonderful time in Anchorage with Lauren’s parents on our Alaska trip two years ago, playing golf until 10:00 at night  and having a wonderful dinner at the house.  We then met

The family deer came to visit and John could not resist taking a few snapshots of his buddy. Dinner was tremendous, Will makes the best salmon on the BBQ. It was a great evening. Sunday was a day of rest and we just had a quiet day with Will and Cathy.  What a wonderful weekend.

Monday it was back on the road. We took the ferry to Port Townsend at the North East tip of the Olympic Peninsula. The day was to see all we could of this great national park. As we crossed on the ferry we passed one of Submarines heading back to port, escorted by our Coast Guard, it was a wonderful sight.

Driving up to Port Angeles, we found the road out to Hurricane Ridge. Only pictures can tell this story.

We took a hike around the ridge, even throwing a few snow balls. 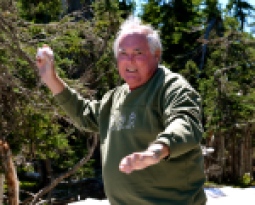 As you see from the pictures, the views are sensational. 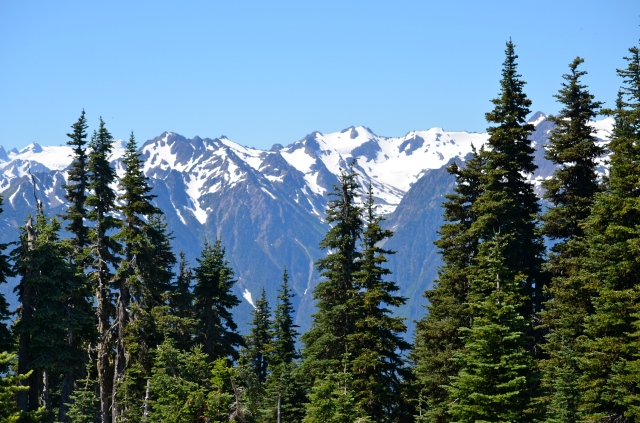 Driving back down to Port Angeles we started the drive on Highway 101 around the mountains on the Olympic Peninsula and worked our way through a few rain forests and on down to the Columbia River to cross over to Astoria, Oregon. We drove through Astoria. What a wonderful port town with great heritage. We left town and headed out to Fort Stephens, Oregon for the night.

We woke up and got an early start to drive on down the Oregon coast. The beauty along the way was stunning, 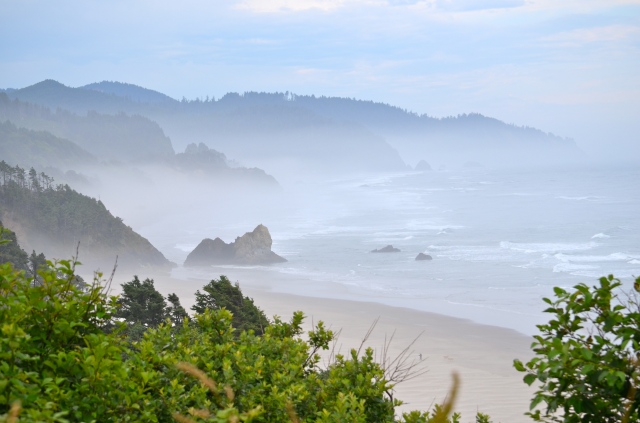 the only problem that day was the rain and overcast costing many views which we believe would have been wonderful based on all the one’s we did see and took pictures of.

Then there was Bandon Dunes!

A site on the Oregon coast that all golfers long to play. We arrived in the early after noon, got out of the RV,  just to return for another layer of clothing. We watch a few groups go off the first tee, dressed for winter! The course, what we saw was beautiful, had the temperature been 20 degrees warmer and the mist of rain, not present we would have been tempted to play. We left with no hats or shirts, since we believe you have to play the course before wearing any trinkets and trash. Exception to the rule is Augusta National where you can only purchase goods if you attended a round at the Master’s. We continued down the rest of the coast to Crescent City and the beginning of the Redwood Forest.