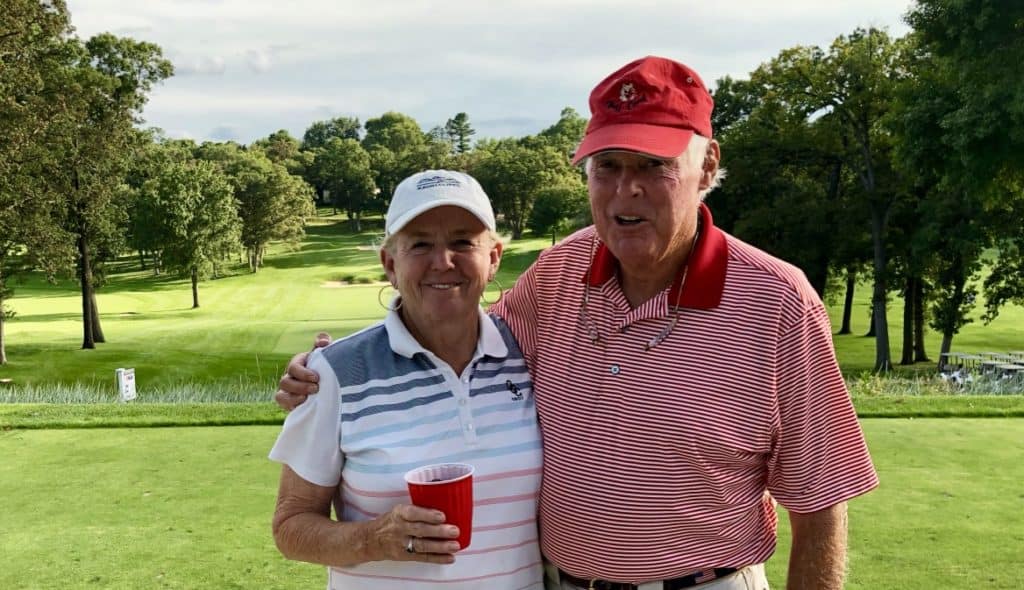 We had a pleasant drive from Will and Cathy’s house on Whidbey Island over Deception Pass and back to the main highway, Interstate 5.  We were presented with a few routes to Osoyoos and decided to take the one that crosses the Canadian border at Abbotsford, BC, about 50 miles east of Vancouver, BC.  The Trans Canada Highway 1 (TCH) took us to Hope and then we followed TCH 3 down into the Okanogan Valley and Osoyoos where Janice was playing in the Canadian Sr. Women’s Am.  We arrived early enough for her practice round to check into the RV Resort we had booked.  The resort was on a lake, so Janice played golf and John read down at the beach!  Good afternoon for both of us. 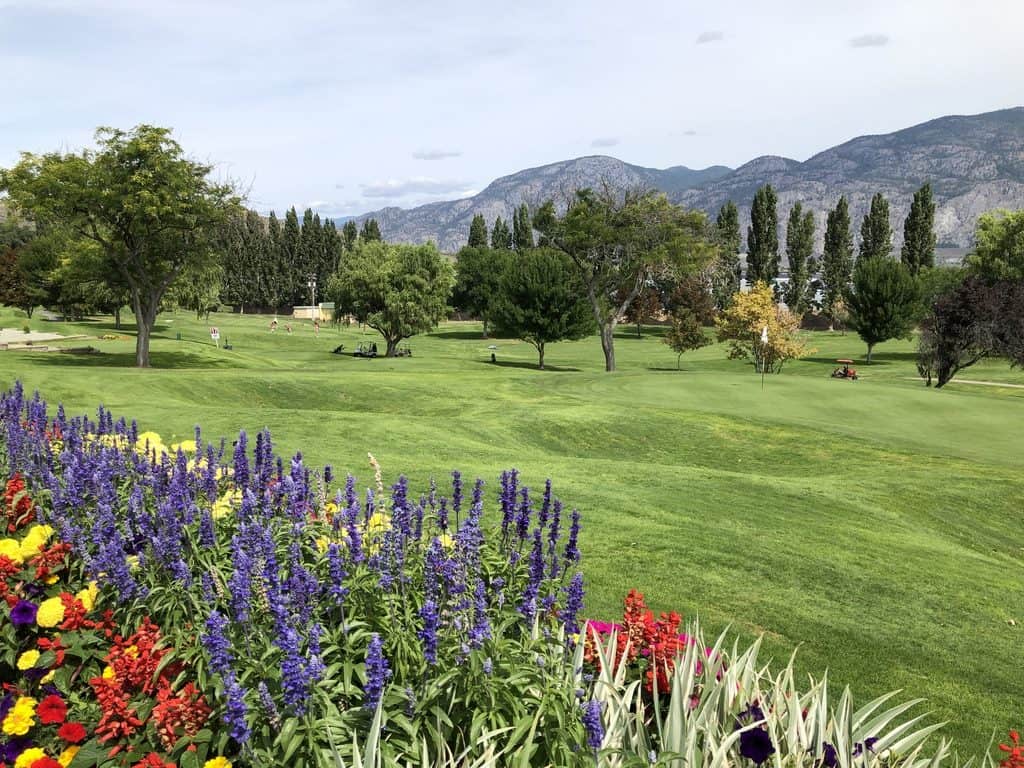 Sunday, Janice had a 1:30 tee time for her first round on the Park Meadows course. The Osoyoos Golf Club.  is a public golf course and they have two courses.  John got a 1:10 tee time on the Desert Course to play a round. He ended up playing with three gentlemen and had a fun round. The picture of the guys  is just to prove someone other than Janice will play with him!

John cannot resist a picture of any deer and there were many around the course.


The vistas were beautiful from up on the Desert Course, with thew lake and mountains in the background.

Janice was paired with Patty Moore from Pinehurst, a player she has played with a number of times in USGA and regional golf tournaments. Janice did not play as well as she wanted but enjoyed playing.

Monday was Janice’s second round and she shot a great 79.  Time for a big decision.  There was a cut to low 70 players and she made it, but the injury had her ankle very swollen and  we needed to be in Cedar Rapids Friday at the latest, a 27-hour drive.  Rather than be totally exhausted for the beginning of the USGA event on Saturday and to give her ankle a rest, she decided to give up her position, having made the cut, to another competitor that didn’t.

This allowed us to  leave on Monday, instead of Tuesday, to make the 27 hour drive with the plan of arriving Wednesday evening.  A much more relaxed way to approach the Cedar Rapids event.

All this said, Janice didn’t think at 70 she could beat the 50-year-old kids and qualify!  Hence, she scheduled qualifying in Chicago and figured it would not impact the Canadian tournament.  What’s the old saying about “Best Plans?”

The “Drive” to Cedar Rapids

We left Osoyoos driving East on TCH 3.  The views back to Osoyoos were just stunning.  We drove about 60 minutes to cross the border back into the US at the Midway, Canada/ Ferry, WA crossing.  The views on both sides of the border were great.  It seemed like a mountain trip thru Colville and then typical farmland, rich and luscious from the irrigation waters which were from Lake Roosevelt as planned when Grand Coulee Dam was built.

We went back to the Northern Quest RV Resort owned by the Kalispel Indians for the night to get a rest before the “DRIVE” to Cedar Rapids, Iowa for the USGA Seniorr Women’s Amateur.

We hit the road around 6:30 and headed east thru Idaho, climbing many mountains and seeing great vistas as we drove into Montana. Once we passed Butte, where we found Evil Kenival’s gravesite last year and of course had to write about it.  We climbed up to Homestake Pass.

We passed the Continental Divide 6,820 Feet. 12:35 August 20, at Homestake Pass on Interstate 90, just pass Butte, Montana. All Downhill from here!

Driving through the mountains, the roads all follow the rivers, so the scenery is beautiful evergreen mountainsides and streams and rivers.  Now we get to follow the water down to the Mississippi!

Lunch was worth mentioning.  Several years ago we stopped at the Wheat Montana Bakery and Deli at the intersection of I 90 and US 287 in Three Forks, MT.

Someone told us that the cinnamon buns were fantastic, so we picked a few up with some scones for breakfast the next morning.  We ordered two sandwiches to go, it is not a quick service, but the food was great.  A good stop if you are on I 90 going east or west.  Three Forks is between Bozeman and Butte.  It is also the exit for the Lewis and Clark Caverns  we wrote about.

We continued on thru Montana, waving out the window at John and Nancy Bohlinger as we passed Billings, guess they missed the wave!  After Billings, we were put on US 212 as it was a shorter drive to Rapid City then staying on I 90.  Good thing we filled up on fuel as we don’t think we saw a gas station literally until we were a few miles out of Rapid City a few hours later.  We had a nice overnight in the Cabbella’s (Bass Pro Shop) parking lot, there offer not only a place to park but a dumping station if needed for the night.

On I 90 you really have to look for something to see.  About 60 miles out of Rapid City is Wall, SD.  This is the home of Wall Drugs.  Talk about a one-company town!  It is a quick drive-thru main street to see all the shops that are either part of Wall Drugs or there because of Wall Drugs.

Wall Drugs was started in 1931 and attracted visitors by offering “Free Fresh Ice Water” and they still do.  They attract over 2 million visitors a year, just passing thru!  it reminds us of “South of the Border” as you enter South Carolina from North Carolina on I 95.   The big difference is that Wall is vibrant and South of the Border is living on vapors!  No fresh burritos!

Just not much to see, a few fields with sunflowers, a lot of hay along the road and then Iowa Corn!  Arrived in Cedar Rapids about 6:30.  A long drive for two and a half days!!  Hence “THE DRIVE”! 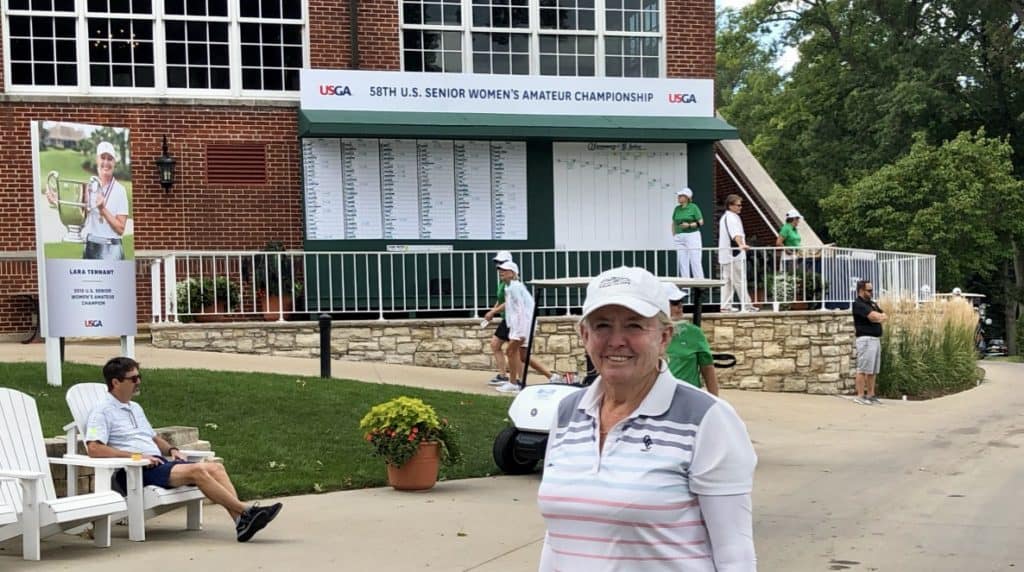 Janice had a practice round the next afternoon with her friends Lin Culver and Patsy Ehraet from Florida. John headed to Iowa City with the RV to check out a warning light signa’ ‘SRS (said it had to do with the airbags). Great news, it was a switch in the seatbelt causing  theSRS message.  The batteries were at least 4 years old, so had the engine batteries replaced.

The next morning Janice had another practice round so John headed over to the Gardner Golf Course to pick up a game.  The course was in the same Squaw Creek Park that we were staying in with the RV for the week. We both had a nice day playing golf, then ran to do  few errands (laundry, get house batteries tested and more importantly, pick up some Rum!  The story of the house batteries is long but worth mentioning later.

Off to the player dinner at Cedar Rapids Country Club. It was a nice dinner and the speaker that was last years winner could not have been better, it was a lovely evening.

Day one of the USGA championship, Janice’s tee time was 1:15,  John was the caddie.  It was a tough first 9 holes, then it came together until the putter decided to NOT WORK!  With a high score for the day, the second day would be to “enjoy the experience” since maing-the-cut was unlikely.  Still, she wanted to give it her best shot.

The second day tee time was 8:30.  Janice was playing better than Saturday, but not good enough to make the cut of 64 . next year she will try to qualify again!

In USGA qualifying you play with the same partners for the two days. I was fortunate to play with Sherry Wright and her caddie Elizabeth from California. Sherry played the best round of golf I have seen in a senior amateur, she shot a 3 under 69, holy cow! We talked for a while after the round.  It  turns out she is 52 and only learned how to play golf 9 years ago, what a Cinderella Story!  In the lead after round one, Sherry’s second day was a bit of a challenge, she needed sleep, with all the excitement, it wasn’t in the cards, she shot a respectable 83,  which easily took her into match play for Monday.

Back to the battery story.

We mentioned a problem with our “House Batteries”.  They are one of the most important features with an RV.  When you are not plugged unto “shore power”, they run literally everything, they make life very pleasant with the fanand lights runing.  If they fail, the RV becomes a very expensive tent without lights or ventilation!

We want to tell the story of how two companies worked their tails off to support our problems with the batteries.  We had purchased the batteries last summer from Dennis Dillon RV in Boise, Idaho.  A little background:

Getting support on the road is hard.  Service departments usually have a month delay before they can get you in.  This is true all over the country.  Many RV dealers try their best to solve problems for people traveling thru, knowing that if they all help out, their customers will be taken care of.  Bob Canady  in the Dillon Parts Department had solved several problems including the batteries and a new refrigerator that needed to be installed in the RV. We enjoyed a great satisfaction with their service.

We had the electrical system checked out while in Osoyoos and determined the problem was the new batteries were not holding a charge. Our first call was to Dillon.  Bob contacted Crown Battery and we were introduced to the Reginal Sales Manager for Crown that had responsibility for Iowa.  Since Boise was a few miles out of our way, Matt Ingram from Crown took charge of seeing that we were taken care of.  Matt was making calls in the Cedar Rapid area and grabbed two new batteries from Crown and met us at the county park we were staying at and replaced the faulty batteries.  They worked perfectly and we were back on the road.

It is just such a great story about RV’ing around the country and having the support of those vendors you have put your trust into!

Update on Sherry, she lost in the first round of match play was 4 down 5 to play and took it to extra holes. Janice will stay in touch with Sherry!