links New Brunswick to Prince Edward Island, completed in 1997 replacing ferry service that was subsidized by the Canadian Rail System. The challenge to building the 8 mile bridge at a cost of 1.3 Billion dollars were many including the tides that moved under the bridge at 18 niles per hour, enough to move a bolder the size of a house!

We crossed the bridge and arrived at the info center on the PEI side where we were given great information on the sites to see and places to stay. Since it was mid afternoon, we decided to find a camp site for a few days and use it as a center to travel and see Prince Edward Island. On the north central Green Gables Shore we found Crystal Beach Campground in New Annan. It was a great central point for the next few days.

In the morning we drove into Summerside the largest city on the Western end of PEI, known as the North Cape, to start the tour of the coast, lighthouses and towns. One of the “must” stops is The Bottle Houses. This is almost a post on its own. Over 25 000 recycled bottles were ingeniously cemented together to create the Bottle Houses. They were built by the late Édouard T. Arsenault. He gave birth to these houses after having received a postcard of a glass castle from his daughter in 1979, an attraction she had visited on Vancouver Island in British Columbia. That same summer, he started collecting bottles from his community, mostly from a local restaurant, community dance halls, friends, relatives and neighbors. In the spring of 1980, at the age of 66, he began his construction, a mere hobby yet. As his six-gabled structure was taking form, 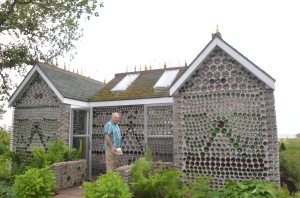 visitors started coming in. Impressed by his work, they encouraged him to continue and to advertise it as a tourist attraction. And so, in 1981, the first Bottle House was open to the public. From 1980 to the spring of 1984, he cleverly cemented over 25,000 bottles of various shapes, sizes and colors, into three fantasy-like buildings.

The tour begins with THE CHAPEL

made of approximately 10,000 bottles, some of the interesting designs included crosses made of beer bottles and the alter made with liquor bottles that you may recognize the shape. Proceeding out of the chapel you come to THE SIX-GABLED HOUSE, his first building he erected with 12,000 bottles. Back then there was no recycling except soda pop and beer bottles, so he would go each week to dance halls, the legion, restaurants and the local dump to collect bottles. His favorite instrument was a pump organ that is in the house. The third building is THE TAVERN. 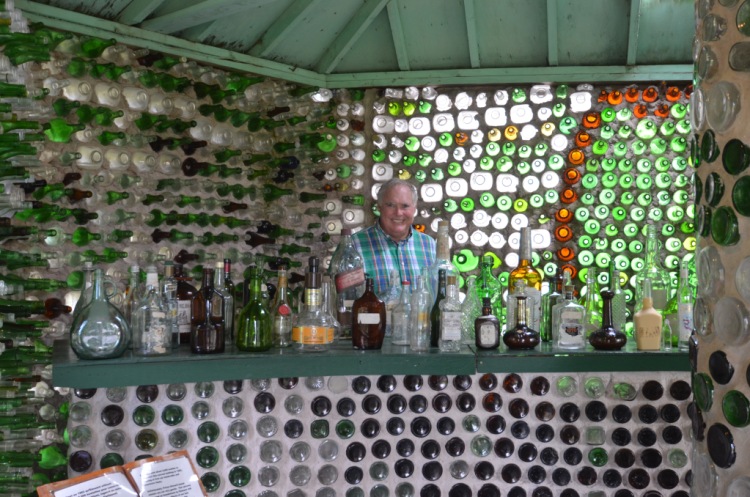 All the buildings were amazing and what a pleasure to visit.

Back in the RoadTrek we continued on the North Cape Coast Drive passing through many agriculture communities on our way to the North Cape Lighthouse. 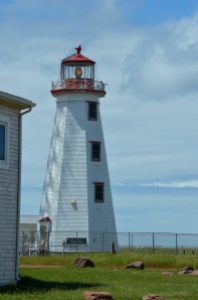 They have a wind farm the generates 4% of the electrical energy for PEI (this sounds like a lot but remember the population of PEI is around 140,000).  this is also a research facility working on combining different green energies including hydrogen.  The Wind Energy Interpretation Center gave us a good education. The PEI Wind-Hydrogen Village has been developed in North Cape, Prince Edward Island as Canada’s first grid-independent Sustainable Energy Supply System for northern and remote communities.

The system is designed to operate on the basis that when the wind is blowing, wind turbines supply power to connected loads including a hydrogen production system. When there is low or no wind conditions, stored hydrogen is used to fuel a back-up generator that keeps the electricity flowing without any disruption of supply.

The PEI Wind-Hydrogen Village is intended to demonstrate an effective and sustainable means for addressing the intermittency of wind power in stand-alone applications. Hydrogen produced from local wind and water is a truly clean and renewable energy carrier with potential for reducing dependency on imported fossil fuels for stationary power and transportation applications. 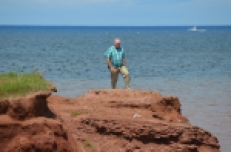 The North Cape is also the home of the largest rock reef in the world, at low tide you can walk all the way out, it was not low tide but that did not stop a family from the challenge. 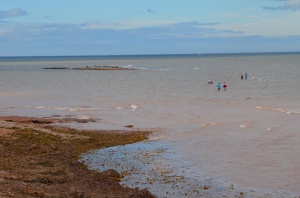 It was fun to see a family freeze their tails off as they waded out towards the end of the reef. Enough for the day we settled back into Crystal Beach for dinner and a view of the sunset. 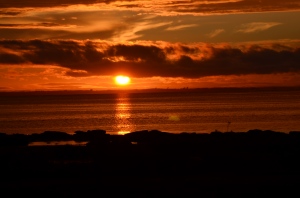 Not only was the sunset spectacular there was a rainbow over our rig at the same time!

Off in the morning to visit the Green Gable Shores. In and around Cavendish there are a number of golf courses. Believe it or not, we left the clubs in the RV and continued to tour. We would see a lighthouse on the map and chase up a side road a few miles, ending on a dirt road and no lighthouse! This happened several times, so we decided to just stay on the regular roads and see what was offered. There were many picturesque small harbors along the way. We then proceeded into the capital of Charlottetown. How Charlottetown plays in the history of Canada is most interesting. There is a Founder’s Hall presentation that goes through the history and is worth the price of admission.

The Charlottetown Conference was held there in September of 1864 to discuss the Canadian confederation. The original intent was combining New Brunswick, PEI, Nova Scotia and Newfoundland into a Maritime Union that the British Crown believed would be less economically and politically dependent. The Province of Canada, Ontario and Quebec asked to participate. The outcome was the Canadian Confederation which took place after another conference in Quebec and one in London, finalized as the British North America Act in 1867. Prince Edward Island waited until 1871 when a ferry link was promised for joining the Confederation. This of course was replaced by the bridge and why it was named the Confederation Bridge. Newfoundland did not join the Confederation until March of 1949 after a ferry link was approved. 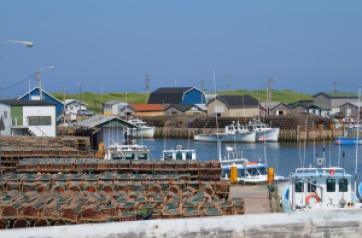 Each small harbor that we drove through had many lobster boats arriving with the final catch and bringing the lobster pots into the harbor. By the end of the day it was party time in each village celebrating the end of the season. We parked in St. Peters at the town park to enjoy a lobster sandwich we made in the RV. There was an elderly couple that spends the summer in the area and they shared many stories with us about the changes in St. Peters since Chuck was a kid growing up there. His family had a 100 acre farm that was plowed using horses as there were no tractors. He said they were poor, but didn’t know it. There was no electric or telephones. He said the town was twice the size of the current town with all the farming and fishing that took place. He had us laughing when he told us that lobster was a poor mans food and if you had it for supper the night before, you never mentioned it. St Peters Bay is a huge muscle farm. We were told that 90% of the mussels served in Canada come from the muscle farms in St. Peters Bay.

Aquaculture is a good size industry on Prince Edward Island. Mussels are placed in socks that are attached to a buoy where they filter tiny plankton out of the water for their food, so they need no supplemental feeding. They get all their nourishment naturally, from the pristine ocean waters that surround them while they grow. In return, they improve the water quality as they clear the water of excess plankton.

We moved on and stopped at the Prince Edward Distillery for a tour.

This is a must for anyone that visits PEI. Some years ago Arla Johnson and Julie Shore opened a B & B. They were from Fort Myers Florida and fell in love with PEI. Julie’s family was from North Carolina and had been distillers of liquor before prohibition, having it her blood she studied at Cornell Ag School and always wanted to build a distillery. Arla said it took seven years for Julie to convince her to build the distillery. A tour of the distillery is a “must see”. They are distillers of Artisan-crafted spirits including Prince Edward Potato Vodka, Prince Edward Wild Blueberry, and Prince Edward Gin as well as adding several whiskys and a wonderful rum.

We continued up to the East end Lighthouse and started the return trip down the coast to the Provincial Park at Woods Island for our last night on PEI. We met Chris Greening and his wife Mylissa the that evening. They were visiting Mylissa’s family in Nova Scotia and they had taken the ferry to PEI for Canada Day. Chris is a young dairy farmer from the Edmonton area of Alberta where he had taken over the family dairy farm. We had a wonderful political discussion with him as he was very interested in what was happening in the United States regarding the Tea Party. We were joking about the t-shirt that we had purchased on the Alabama golf trip from the North Alabama Tea Party, he said he would love something like that. John is a great believer in when someone admires a neck tie and says they would love one like it, you take it off and give it to them as a gift, don’t know where that comes from, but it is a fun and great tradition. 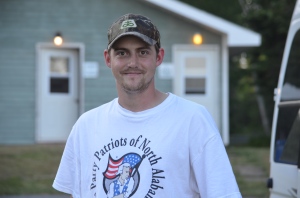 Needless to say, Chris now has the shirt. What was fun was having a discussion about the problems in Canada and those of the USA. He has the problem of finding labor that is willing to put the long hours in that are required in the dairy business. We think that he summarized a problem that we all recognize, if in Canada or the USA.

Morning came and we had the joy of celebrating Canada Day with our new Canadian friend. We were only 3 miles from the Ferry and caught the 9:45 AM ferry to Nova Scotia and another adventure.

Say goodbye to the Woods Island Lighthouse as we left the harbor and the wonderful Prince Edward Island.