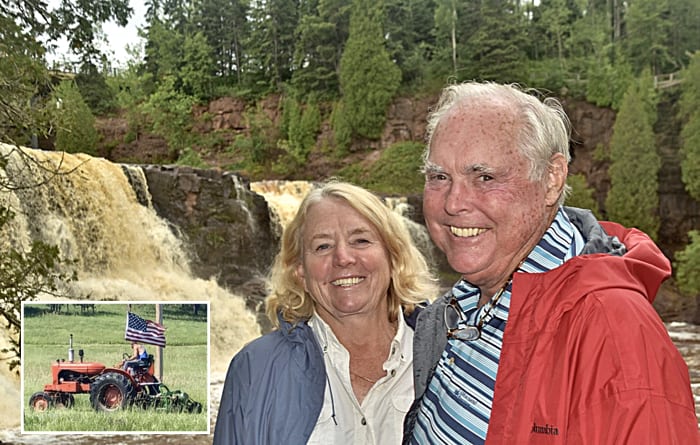 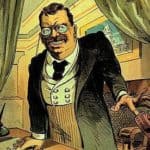 Our 26th President (from 1901-1909), Theodore Roosevelt, was famous for using “the bully pulpit” in his presidency, to influence activities at home and around the world. “Speak softly, but carry a big stick” was a proverb he loved to quote characterizing his foreign policy.  That’s how the golf course got it’s name, “The Bully Pulpit”

Roosevelt ventured to the Dakota Territory in 1883 to hunt bison. He returned the next year after two devastating personal tragedies, he lost his mother to typhoid fever and his wife to kidney failure.  He went to grieve and lose himself in the vastness of the territory. He purchased two ranches and became a cattle rancher.  He said he found “adventure, purpose, and wholeness.”

His two large ranches, Elkhorn and the Maltese Cross were near The Little Missouri River and only a short distance from where Medora was Founded.

“I have always said I would never have been President if it had not been for my experiences in North Dakota” -Theodore Roosevelt, 1918

Roosevelt credited his Dakota experiences helping to shape his own character and his groundbreaking efforts as president to translate his love of nature into law. He established the US Forest Service and signed the 1906 Antiquities Act. Under the Antiquities Act he proclaimed 18 national monuments. He worked with Congress to create 5 national parks, 150 national forests, and dozens of federal reserves with over 230 million acres of protected land.”  We currently refer to it as our National Park Services.  Other presidents have added to the National Park Services utilizing the Antiquities Act.  It is truly our favorite Federal Department having visited so many of our fantastic parks, forests and monuments. 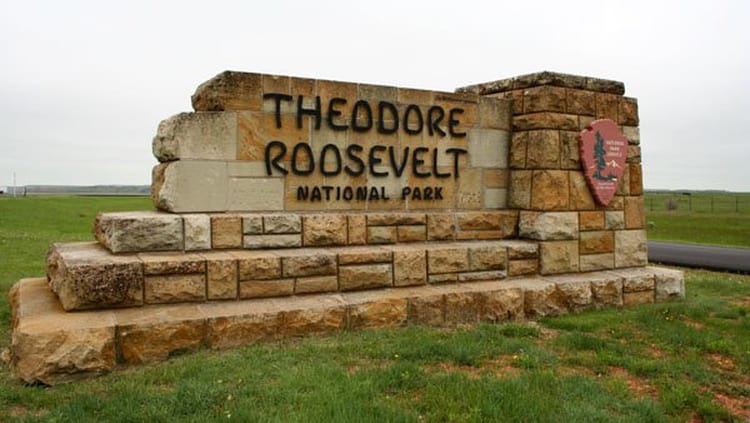 Medora was founded in 1883 along the transcontinental rail line of the Northern Pacific Railway by French nobleman Marquis de Mores, who named the city after his wife Medora von Hoffman.  Marquis de Mores wanted to ship refrigerated meat to Chicago via the railroad. With financial backing from his father-in-law he built a meat-packing plant for this purpose along with stores, a hotel and a large home (Chateau de Mores) overlooking his new town. The heavy influx of capital signaled the move from The Little Missouri to the new boom town. Despite the marquis vision and all of his various enterprises, it ended in financial failure by the fall of 1886.

With their son, the family moved back to France where another son was born. The marquis continued his visionary and adventurous lifestyle and was killed by natives on the Sahara Desert in Africa in June of 1896. His widow Medora never remarried and died in France in 1921.

Medora continued to be a “cattle town”.  Theodore Roosevelt visited the town as president in 1903 and a local hotel changed its name to the Rough Rider Hotel.  The first “dude” ranch in the United States started about five miles from Medora

We stayed right next to the 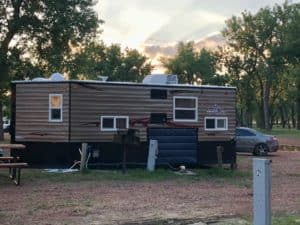 National Park entrance in a nice RV park, when we were first assigned a spot it was right next to what looked to be a RV in bad shape and the lot was too crooked so we moved over one spot. Once we met the gentleman that was there with his wife and grandchildren we were told the story. The RV was also his ice house for fishing in the winter. This proves you cannot judge a book by its cover. 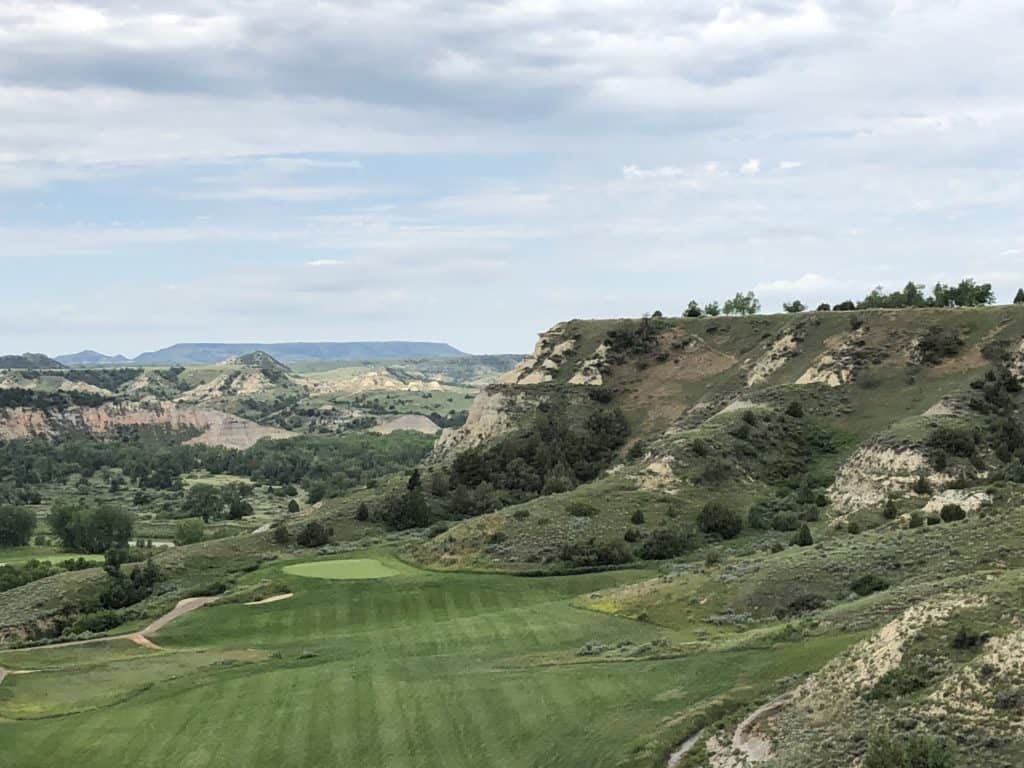 We headed over to the course for an early tee time.  The layout and vistas were just sensational,

We had a great time playing the course enjoying the wonderful views.  The Bully Pulpit Golf Course was a great experience and a must if you ever get to North Dakota. 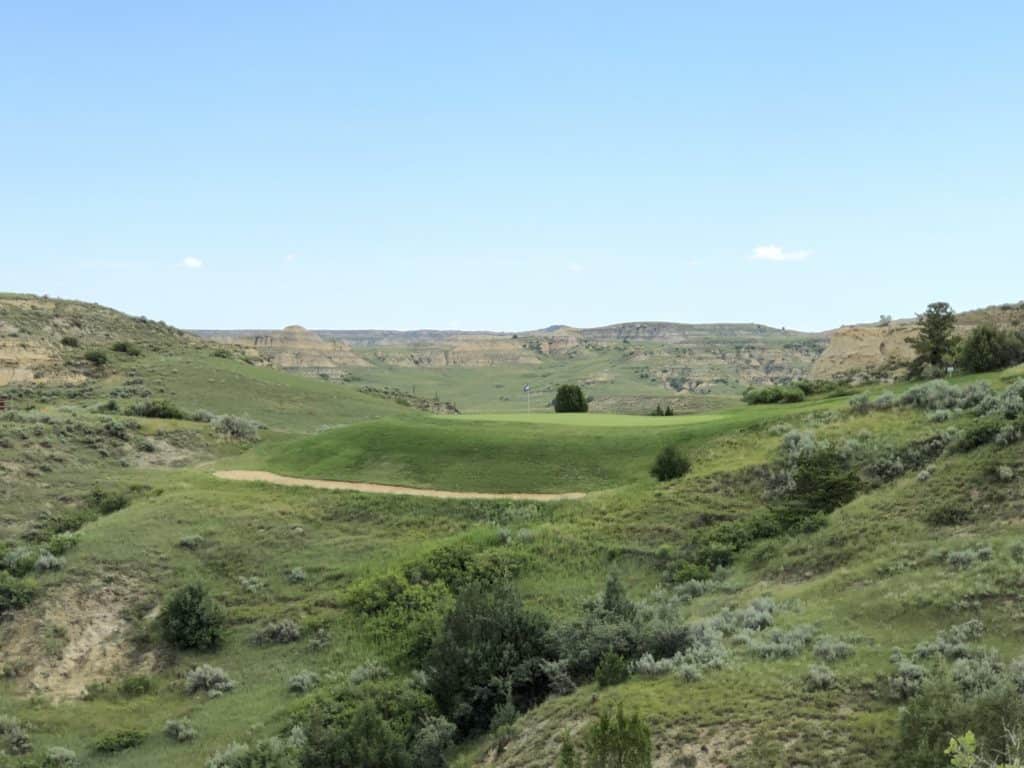 We finished golf and went to town to check things out having lunch at a local cafe and checking out the local stores.  Like so many of us, we are trying to get rid of “stuff”, so we would laugh about the items we would have purchased if we were much younger!

The next day we added to our plans to see a one man play  at the small theater in town. First we took a ride through the National Park. 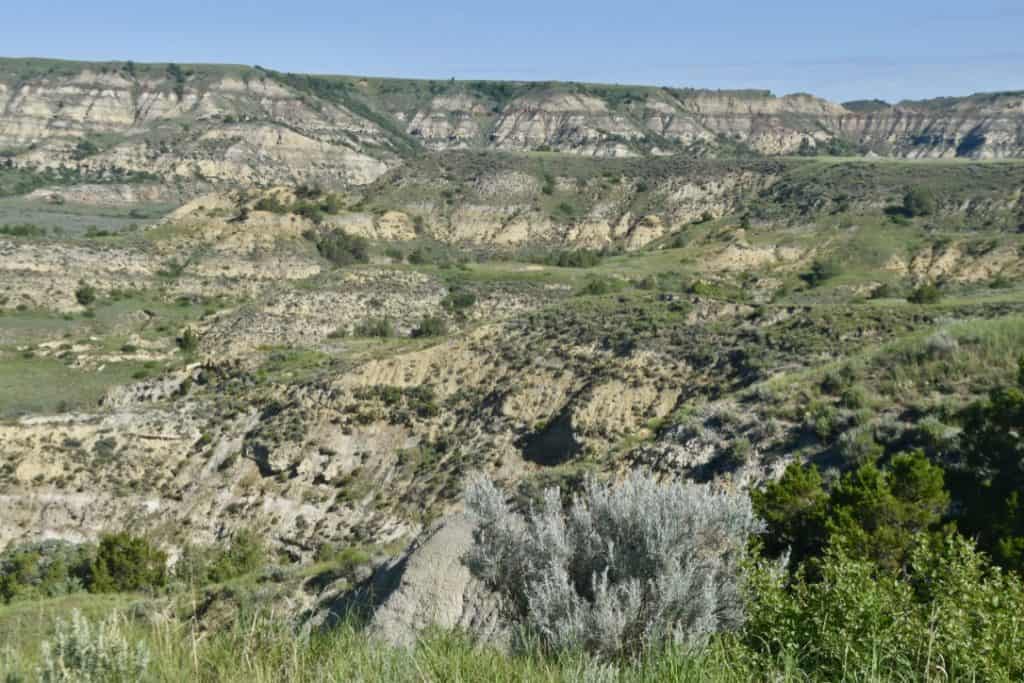 The badlands are beautiful and because there was much rain there was grass everywhere, unusual for this time of year.  As we rode through the park we saw a field of prairie dogs, running around or popping their heads out of their burrows. 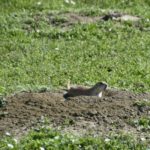 As we continued our drive we ran into a herd of buffalo. 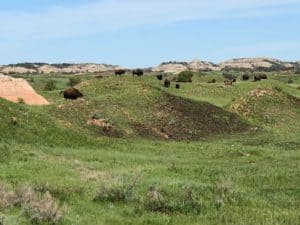 The National Park system does a good job of protecting these animals. We loved seeing all the various animals as we drove through the park.. The vistas were beautiful.

We made a turn and to the side of the road was a  lone bull buffalo. What a great “photo-op”!

The Old Town Hall Theater was very small and old.  We walked in with the rest of the audience

and found a small stage with a lone chair.  It was a perfect setting as Joe Wiegand walked in looking a perfect “Teddy Roosevelt” and took the stage and introduced himself as Theodore Roosevelt.  We had no idea what to expect.  He proceeded to tell stories as if he was Roosevelt  in person, we felt like we were back in time listening to him give us a personal history about his life and times in New York, The Dakota Territories, The charge up Sa Juan Hill in Cuba, his presidency and so many memorable tidbits of his history.  John’s family lived a few miles from Roosevelt’s home at Sagamore Hill in Oyster Bay, so it was fun to catch up with the actor, Joe Wiegand after the show.  He had done a number of “Roosevelt” activities at Sagamore Hill.  It was a fantastic one man show and truly a highlight of our time in Medora.

We headed over to the Rough Rider Hotel to enjoy a Makers Mark on the rocks after the show, had to enjoy a drink in the hotel that had changed its name for the visit of Teddy in 1903. 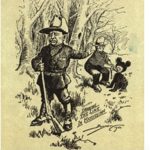 came to be.  In 1902 when President Roosevelt was hunting bear in Mississippi, he had not found a bear, one of the guides found an old black bear that was injured and tied him to a tree.  They went to get The President and took him to the bear.  He would not shoot it feeling it was unsportsmanlike to do so, but because the bear was very injured and sick, he asked them to please put it out of its misery.  The story was reported in the press and political cartoonist Clifford Berryman picked up on the story, drawing a cartoon showing how President Roosevelt refused to shoot the bear while hunting in Mississippi.  Other cartoonist created many more cartoons of the bear, which continued to get smaller and shook with fear of Roosevelt.  Clifford Berryman continued to have bears in cartoons throughout Roosevelt’s presidency. 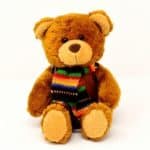 The Teddy Bear tie came when a Brooklyn, NY candy shop owner, Morris Michtom, saw Clifford Berryman’s original cartoon of Roosevelt and the bear and had an idea. He put in his shop window two stuffed toy bears his wife had made. Michtom asked permission from President Roosevelt to call these toy bears “Teddy’s bears”. The rapid popularity of these bears led Michtom to mass-produce them, eventually forming the Ideal Novelty and Toy Company.

Over a hundred years later we still love teddy bears!  As Paul Harvey used to say…….”and now you know the rest of the story’!!!

The Pitch Fork Fondue is a steak dinner. buffet.  When you arrive there is a country band playing 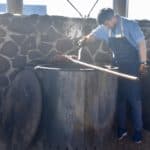 in a large open area looking out over the badlands.  The long tables, under cover were full of people waiting for the dinner to begin.  The chefs cook the steaks in vats of hot oil on the end of pitch forks, which makes it interesting.  It makes it hard to have them rare or medium rare, so well done was the way we were served, unfortunately not the way like our steaks!   The large dinner crowd was very festive waiting to be served in the buffet line.  We filled plates with the sides and then stop by the cooking area to get your steak.  It was interesting, but would not recommend the  pitch fork dinner. 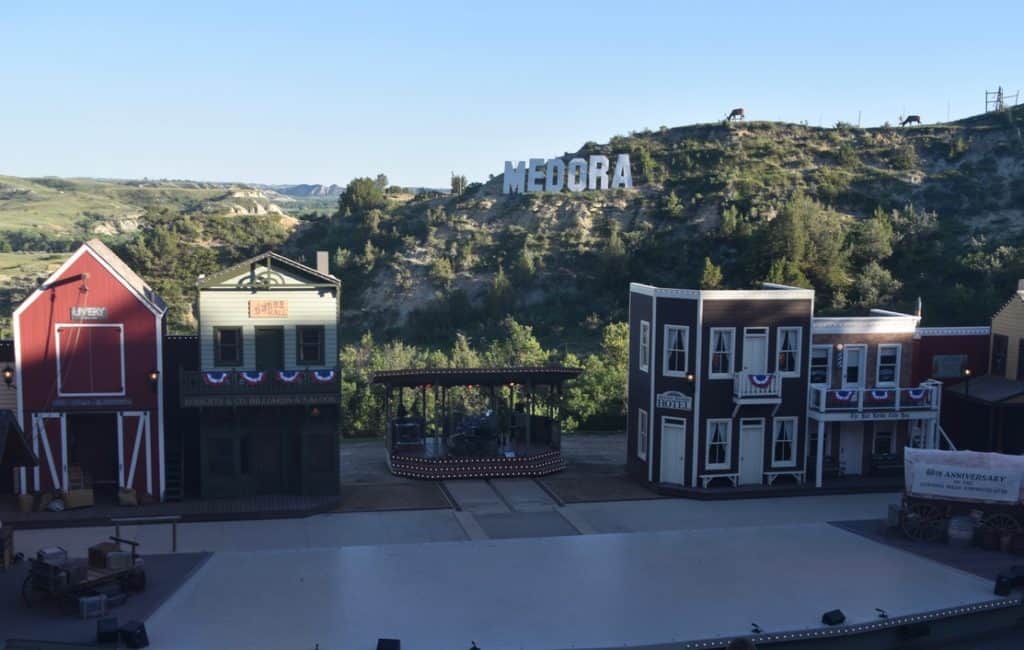 It was then off to the outdoor theater to see the musical. The stage was set up like an old western town and when the musical started the host and co-host came out to greet.  Bill Sorensen, who

had been with the show from its beginning made an announcement about one of the actors that rode the lone horse near the end of the play, and had been with the show for over 30 years, had passed away suddenly the previous evening.  They played the national anthem and had a moment of silence . Bill being the master of ceremonies had tears in eyes as he told the story of their friendship and how he will be missed.  He hesitated and told the audience that as sad as the cast was the “show must go on”. There was not a dry eye in the audience.

The show began and while a bit corny it was a treat. Singing and dancing and a balloon guy along with the horses and short war between the Indians and Calvary.

We did love this and if anyone gets to Medora do not miss this show or the Roosevelt play.

Back to the park for a nights sleep, we were heading to Minnesota for our next adventure.