We had a wonderful time with the Roberts clan at Lake Sunapee and it was time to start the trek west.  We had a great drive through Vermont and upstate New York to Lake Seneca.  We planned to do another Harvest Host stop at a winery and arrived for our wine tasting around 4:00 on that Friday afternoon at White Springs Winery and Glass Factory. 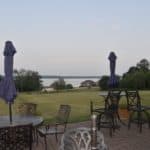 The winery sits on a hill in Geneva, New York overlooking the lake.

They gave us a nice location in the parking lot to park, we enjoyed sampling some of the many wines they make and purchased a few bottles to take with us as gifts.

They closed at 6:00 and told us to make ourselves at home and use the patio once the winery was closed. We put our dinner together and sat on the patio with lovely views of the lake, another good day.

Cleveland with Kim, Tony, and their two lovely daughters Stella and Daphne. 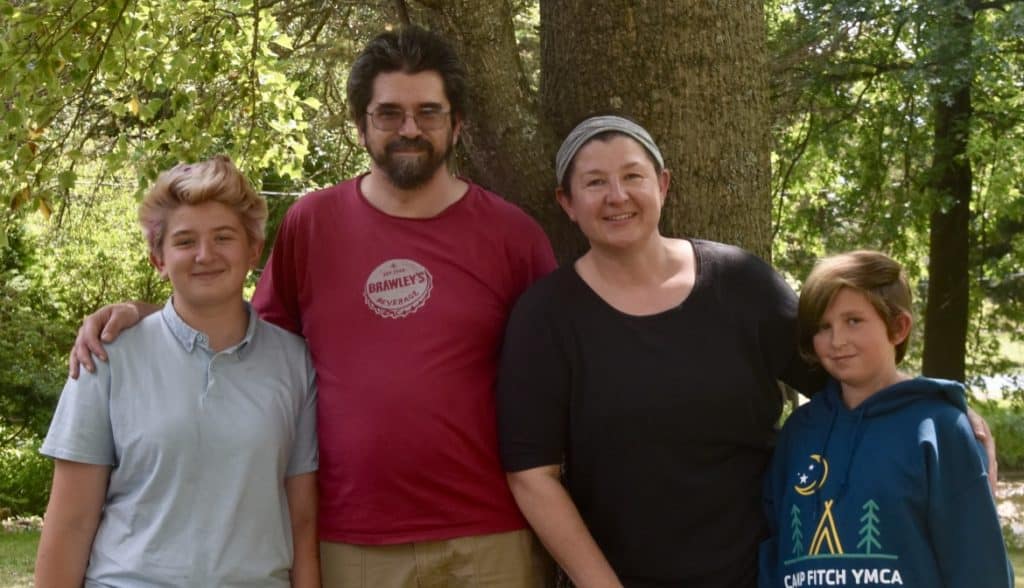 We drove from Geneva to Cleveland Ohio to have lunch with Janice’s niece Kim (Janice’s brother Steve’s daughter), Tony and the girls. Daphne had just returned from two weeks in camp and was looking worn out from all the fun, Stella had been at camp several weeks earlier. Hard to imagine but Stella is learning to drive starting next week.. wow… We chatted about lots of things, family, work and friends…remembering t 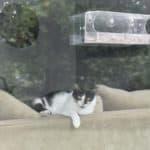 he fun times we all had years ago at Janice’s parents home on Lake Sunapee when Kim was Daphne’s age.  We were getting ready to leave Janice noticed their cat sitting in the front window, the bird feeder is right there, he watches as the birds come to feed.   It was time to hit the road we bid our fond farewells.

Ari and Hedi in Freemont, Ohio

After having lunch we made the 2-hour drive to visit Ari and Hedi.  We met them on our first RV trip to Alaska in 2010 with a group of 50 Roadtrek owners.  It was the best trip imaginable.

We all met at “mile marker one” on the Alaskan Highway in Dawson Creek.  Very few knew any of the other participants.  We did not travel as a group, but met up on various occasions and got to know each other a little better and swap stories of what we had seen.  One comment that we always laugh about, “if you don’t have the picture, you did not see it, it didn’t happen!”

We still enjoy the friendships we made during our 8 weeks together and make a point of visiting each other when in “the neighborhood”.  Hence we were fortunate to be in Ari and Hedi’s neighborhood.

Their home, which they have been in since 1986,  is on the bank of the Sandusky River with all kinds of boating activities going on.  They enjoy their “Martini Barge” parked in front of the house.  We had a drink and then went to a neighbors house for the owners 40th Birthday.  It was also their anniversary so they had will over 100 guests.  We joked with Ari and Hedi that it was so nice to have a party for us and that Bill would host it!

Ari is a good artist and brought one of his limited edition watercolor prints as a gift.

It was greatly appreciated by Bill and his wife Erica.   Many of Ari’s original watercolors are on display in the house.  His art is also on display in 20 galleries around the country.  Many of the pieces are from their travels.  Both Ari and Hedi were young children during World War Two in their home country of Germany.  Their stories, fortunately, have been written and published for their family history

The evening was a lot of fun and we had the pleasure of meeting a lot of friends.  We will return and spend a few days with them on a future trip, there are so many things to do in the Freemont area.

We left Ari and Hedi’s around 7:00 in the morning and drove to Plymouth to play a wonderful golf course that we were going to write about. 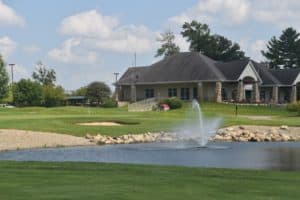 A farmer named Roy Swanson ran one of the largest chicken farms in the country.   While on a

promotional poultry trip to Illinois he struck up a conversation with another poultry farmer who had recently built some golf holes on his unused property.

Always intrigued by new ideas, Roy got addicted to golf and planed out and developed 3 golf holes on his property.  He then contacted Al Humphrey, a local golf architect, and soon three holes for the family grew into a 9-holes.  He added an additional 27 holes culminating into two 18-hole courses. Swan Lake Resort officially opened on Memorial Day weekend in 1969.  At the time it was a destination for golf school and they hosted thousands each summer.

The resort was purchased in 2000 by the Richard Klinger family that owned the RV manufacturer Holiday Rambler.  The course was revitalized in 2017 Chad Hutsell, Director of Golf, welcomed us when we arrived and told us about the history of the course, he was a very welcoming individual. He wanted us to play the premier Black Course,  so off we went.

The team put together a plan of revitalization in 2017 which led to the Indiana Golf Course Owners Association awarding Swan Lake Resort the 2018 Indiana Course of the Year.

We enjoyed the course very much when we completed our round we were going to drop back in and thank Chad and the young man cleaning our clubs said he had left, that young man was Chad’s son and he told us many stories. Another great day.

On to Chicago to Pete and Bunnies!

Libertyville  Illinois, the home of Pete and Bunny.  We met Peter and Bunny on the Alaska trip where we met Ari and Hedi.  We have enjoyed several get togethers with them over the years including playing the Alabama Golf Trail in our RVs and traveled to New Zealand and Australia for golf and sightseeing.  Bunny had a “Hole in One” at the Cape Kidnapper Course in New Zealand!

We wanted to visit with them for a few days so Janice picked Chicago to qualify for the USGA Senior Women’s Amateur at the Glenview Golf Club.

We enjoyed catching up on family stories, great wine, and good food.  For the first time, we headed downstairs to help Pete with a computer that needed to be hooked up to the Internet, at the bottom of the stairs there were at least a hundred airplanes. Pete flies these as a hobby..what a sight! Always the gracious hosts, we had a great time.

We played a practice round together on July 30th, so got a good look at the golf course and Janice could plan the approach for each hole for the qualification round on the 31st. This municipal course is a hidden gem, it is challenging and in excellent condition, a big surprise.

Janice had an 8:40 tee time for the qualification round with two other qualifiers.  We sat near the tee and watched a few of the “kids” (the 50-year-olds) teed off the first hole,  whip their clubs on their back and head down the fairway.  It really looked like they were in their 30s!  At 70, Janice just laughed and said: “what happens, happens!”

A double bogey on the first hole followed by two bogeys on the next two holes, she thought that it could only get better!  She felt that a score of 80 for the round would qualify.  The front continued to be a challenge, scoring a 43 for the nine holes.

We laughed about the score, just happy to be able to compete with these kids at 70!  Janice said, “I am just going to have fun on the back 9”.  Will fun she had.  With a bogey on the 10th hole, her game started to come together.  Another bogey, a few birdies, and the rest pars, she shot a 37 on the back making the 80 score, she thought she needed!

Back out to the 16th hole a 504 yard Par 5.  Great drive just off the fairway in the rough.  She followed with a good shot leaving about 110 yards from the green.  Her next shot hit the green and was about 8 feet from the hole.

One of the other playoff participants hit a great shot and was about 12 feet from the hole, sank the putt for a birdie.  Janice watched as the other two players missed their putts.  Janice lined up her putt, just a little pressure!  This putt, if made, puts her in the Cedar Rapids tournament in August!  SHE SINKS THE BIRDIE PUTT!

She laughed that the “old lady” beat the kids, making her the oldest qualifier in Chicago!  Janice really could not believe she was headed to the USGA Senior Women’s Championship in Iowa the end of August.

Last dinner with Pete and Bunny

Back to Pete and Bunnies for a nice dinner, a few more drinks. The next morning Janice asked Pete why his Internet was so slow, only 4 Mbs Comcast? He comes out with a Netgear  ORBY Router that has been in the boxes for over a year. His son-in-law said it would fix the problem but never got it installed. We had installed these at our house, so about 30 minutes later his Internet was running at 70 Mbs.

It was time to head out we were going to try and play Cedar Rapids Country Club, the site of the USGA Senior the end of August.