Since Janice had qualified for the USGA Senior Women’s Amateur we headed to Cedar Rapids, Iowa.  The course that is hosting the tournament happens to be on the list of courses that we are writing about.  We called and they were delighted to have us play later in the afternoon.

We arrived about 4:00 in the afternoon and went to the first tee.  The course is very special.  Donald Ross, one of the most famous early 20th century golf architects, had designed it in 1915.  In 2015 Cedar Rapids Country Club spent $4 million renovating the golf course using the old Donald Ross designs, bringing it truly to the original conditions.

What a thrill to play, we have over the years enjoyed the opportunity to play a Ross course.  Cedar Rapids was a great example of his work with raised greens that had rounded edges, where if you didn’t get the ball far enough on, or too far back, the ball just rolled off!  Often when it rolled off, you were 3 to four feet below the putting surface in short rough.

Many of the bridges that cross the streams are suspension bridges, a nice touch everywhere on the course.

From an architect’s perspective:

“I think Ross realized he was introducing a new populace to the game of golf and felt a responsibility to use his work to teach the game in a balanced manner and examine a player’s ability to hit a broad spectrum of shots. His use of bunkers to direct a player to the proper line of play and or suggest a shape of shot spoke to the player abilities. Ross didn’t force the player around the course, he gave them multiple options and let them choose. Many times the shortest route was fraught with danger but the longer route was more visible and comfortable. The approach from each would present a different requirement and difficulty. There are certainly cases such as the Volcano par 3’s where he required one dominant shot type to reach the green – an aerial approach in this case.

Ross’s work is so unique because he routed and designed from what he was given at each and every piece of property. His courses and holes seldom look alike due to the way he connected each and every hole to “that” piece of property. I’ve often said Ross designed his holes by visualizing golf shots and knowing how the ball would react once on the ground. He placed bunkers and angled his greens and edges to interact with what he perceived the ball movement, drainage, and other factors to be. His ability and willingness to route holes and place greens over, through and across a variety of what would be considered severe topographic features to a modern day architect was very impressive considering the equipment at his disposal.”

We found a great county park in Cedar Rapids for the night and were able to make reservations to stay during the  tournament later in August.

We entered Iowa and immediately saw the town of La Claire where we had visited the pickers store last year, our memories went crazy. We were passing a number of places we visited last year so we decided to tell about those adventures in this blog, last year we had numerous problems with the RV, so writing the blog lost its priority.

One thing is always true when you make a detour in Iowa, you may end up driving between corn fields for a while!

What a blast it was like being on TV, no one from the show was there but great fun. We spent time in both stores and ended up with a few coffee mugs.

It was just fun to see all the things they have collected and sell.  In many cases the old adage that someone’s junk is someone’s treasure is absolutely true.  It is a lot more fun to watch their show. 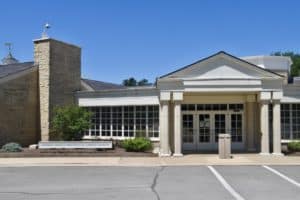 “Herbert Hoover, the only president from Iowa”, the sign on the highway read.  We had such a fun time at the library and learned so much about him. We posted the blog piece Herbert Hoover Library last year.  A great stop.

The movie by Clint Eastwood about the Bridges of Madison County was based on a great book by Robert J. Waller.

The story was fiction but based on a rumored love story.  The stars of the movie were the bridges themselves.  The community over the years has done a lot to protect them and they are a pleasure to visit.

It was just fun to not only visit the bridges but the Madison County Courthouse and the main street.

Like the “Bridges”, another relic of Madison County is John Wayne!

We stopped to see John Wayne’s birthplace, and museum.  It was a quick stop.  Most of the museum is a gift shop where you could purchase “trinkets and trash”.  They charged to actually tour his birthplace and we just didn’t see the value.

Growing up and being a fan of the “Duke” was a lot of fun and those are the memories you take with you.

He was awarded the Congressional Gold Medal on May 26, 1979. Robert Aldrich, president of the Directors Guild of America, made a particularly notable statement:

It is important for you to know that I am a registered Democrat and, to my knowledge, share none of the political views espoused by Duke. However, whether he is ill disposed or healthy,  John Wayne is far beyond the normal political sharpshooting in this community. Because of his courage, his dignity, his integrity, and because of his talents as an actor, his strength as a leader, his warmth as a human being throughout his illustrious career, he is entitled to a unique spot in our hearts and minds. In this industry, we often judge people, sometimes unfairly, by asking whether they have paid their dues. John Wayne has paid his dues over and over, and I’m proud to consider him a friend and am very much in favor of my government recognizing in some important fashion the contribution that Mr. Wayne has made.

Off to another unplanned stop at the Amana Colonies. It is made up of 7 villages on 26,000 acres of land.

The villages were built and settled by German Pietists,  were persecuted in their homeland by the German state government and the Lutheran Church. They first settled in New York near Buffalo. Seeking more isolated surroundings, they moved to Iowa in 1856. They lived a communal life until 1932.  Due to the depression, the colonies were in financial distress and the communal life changed. The most widely known business enterprise that emerged from the Amana Society is Amana Refrigeration, along with providing woolen products to the Army in World War II.

We stayed at the Amana RV Park and played golf at the Amana Golf Club, it was an excellent time and we learned more about the history of the grand country. 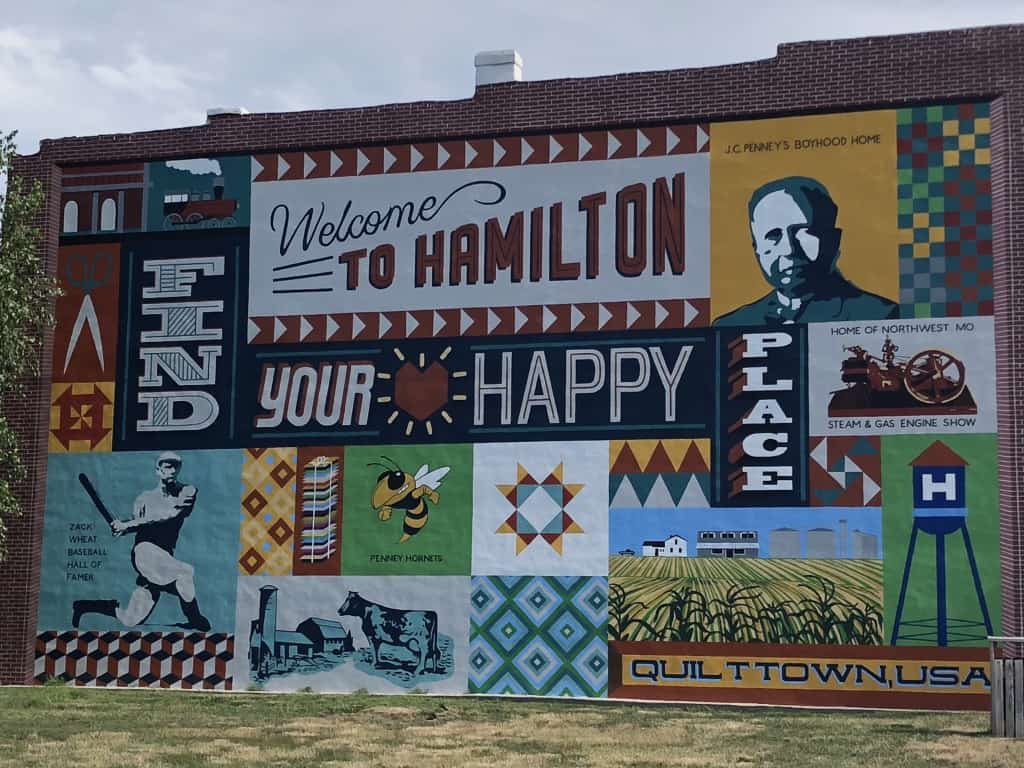 Over the border to Missouri, sole mission was to visit Hamilton Missouri and the  Missouri Star Quilt Company. Janice started making quilts when while going through things from her mother, she found a bag of material sewed together into squares with a note “these squares were made in 1930 by Jeanne Otis and Helen Otis.”  Jeanne was her mom and Helen was her grandmother.

A little history makes this a wonderful town to visit. In 2008, downtown Hamilton, Mo., looked a lot like a thousand other forgotten, rural towns. Abandoned, forlorn buildings marred the main drag.

The story of the Missouri  Quilt Company in Hamilton

Jenny Doan was down on her luck and fearful of losing the family home during the mid 2000’s and her son and daughter came up with an idea to help her out in 2008 with some extra cash flow.  Alan, her son  and his sister took out loans and set their mom up with a business sewing other people’s quilts together.

Customers kept asking for fabric, so Alan built a website to sell it.  Doan started to put pre-cut fabrics together for sale  The packages were a relatively new product with bundled patterns of fabric that could be put together  with different, complementary prints, making it much easier and faster to make good-looking quilts.  The first year was terrible!

Alan asked his mother Jenny if she could do tutorials.  She had no idea about how to do them, but they studied YouTube and they developed tutorials on making quilts.  The videos featured the pre-cut fabrics.  Sales based on the YouTube views started to take off. Nine years later after founding, her 500-plus videos have logged 135 million views and lifted annual revenue at the family’s online fabric retailer, Missouri Star Quilt Co., to an estimated $40 million.

There are a number of wonderful painted murals around the town.

Betting that the company would get a leg up on competitors if it had a place where Jenny’s YouTube fans could see her in person, the Doans have remade the one-stoplight town of Hamilton, Missouri (pop. 1,900), into what they call “the Disneyland of quilting,” attracting as many as 8,000 tourists a month. Today the Missouri Star Quilt Company has over 200 employees to staff the stores in Hamilton and ships thousands of packages a day from the warehouse.. 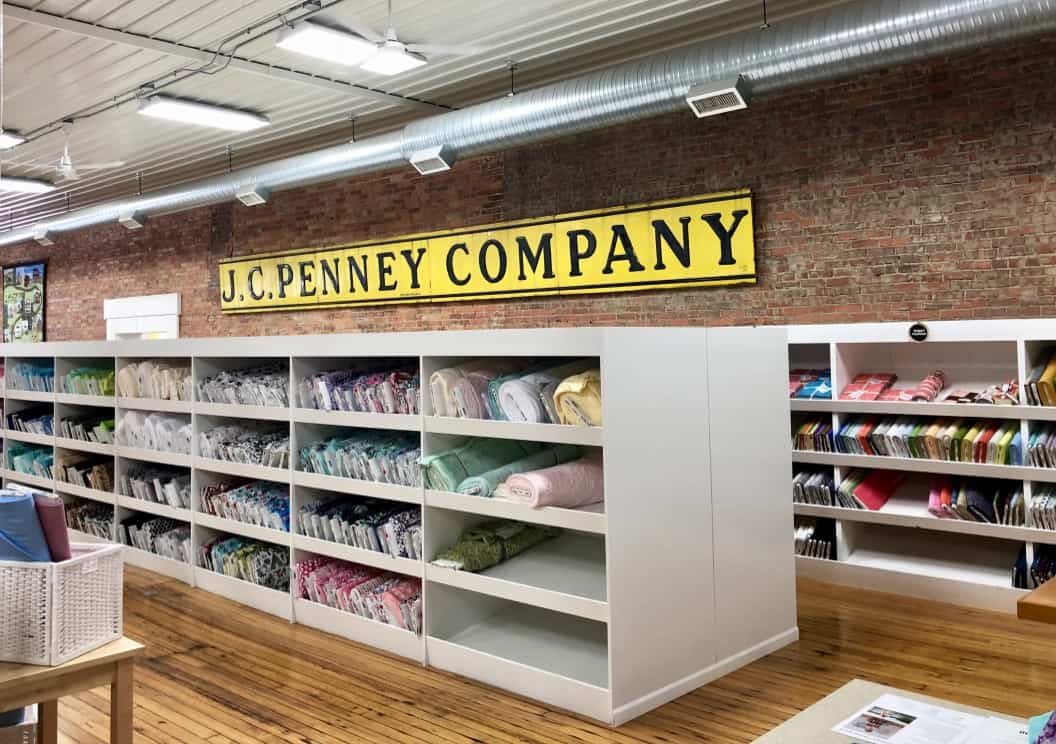 Our Visit to the Hamilton Stores

In the morning we headed into town to grab some breakfast before walking through the shops. The entire town looks very old but at the same time new. Each of the quilt stores focuses on different types of material,one that stood out was the old JC Penny store with all kinds of materials.

Janice was way overwhelmed with choices, every store had such beautiful materials and kits for making fabulous quilts. The staff really stands out with their effort to help, giving you ideas and answering all your questions.  They actually recommend other locations to find what you are looking for.  Just a very pleasant experience

Since husbands were a part of the experience, The company believed that “behind every woman in a quilt shop is a man carrying 15+ bolts of fabric and begging her to stop buying more!”  It’s the classic tale that’s been around for years. Amid their many quilt shops in Hamilton they created “Man’s Land”, a lounge and billiards area for the men to enjoy.  Take a a nice long look at these comfy recliners, but watch out!  Sit down for “just a minute” and you’ll never want to get back up!  They’re all facing two big screen TV’s. It’s the perfect setup for watching the big game or getting some shut-eye. As they say “go ahead, take a load off and let her shop!”

If you are into quilting this is an unbelievable town. Our sister-in-law Marilyn Roberts, an expert quilter,  said we needed a plan, she was right but you need to know a lot more to formulate the plan.