Pinehurst is one of the greatest golf destinations in the United States.  it is famous for the golf 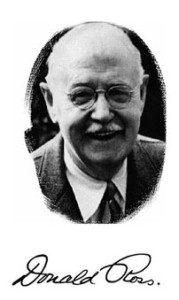 courses designed by Donald Ross, one of the most famous golf course architects ever.  Ross apprenticed under Old Tom Morris in St. Andrews, Scotland and arrived in the United States in 1900.  He is credited with designing or redesigning over 400 golf courses in the United States from 1900 to 1946. Both of us relish the opportunities to play Donal Ross courses whenever we can.

The United States Golf Association’s US Open was played last year on Pinehurst #2.  We visited Pinehurst a week after the Open.  Pinehurst #2 was closed for installation of new greens by Champion Turf Farms out of Texas.  The Champion Turf is a hybrid bermuda that does very well in the southern United States and is wonderful to play on.  We talked with the contractor working on the greens and learned that they were the same team that had installed new greens at our home course in Holly Hill, Florida, “The Riv” earlier that summer.

Every year Pinehurst Resorts sponsors two North and South Amateur Golf Championships, a series of tournaments which includes a Men’s Championship inaugurated in 1901 and the Woman’s Championship that began two years later. There is now a division for Seniors, over 50 for women and 55 for men.  Janice was playing for the 4th time in the Women’s Senior.

Dave and Lin Culver, our friends form Hammock Beach, just north of Flagler Beach rented a four bedroom house in the Pinehurst Village which we shared with the Culver’s, Gigi Higgins from Cape Coral, Linda Evert from Nashville and Bob Love from Toronto. The house was perfect with each bedroom having its own bath and a nice open kitchen/family room and outside deck for relaxing and having an occasional drink. We had our own mascott, Pumpkin, the kitten! Our daughter Kieran drove down on Friday night to join us for dinner.

The next morning John, Janice and Dave played #2 at Pinehurst, what a treat! Since it was redone a few years ago by Ben Crenshaw and Bill Coore, they took it back to the natural landscape and original Donald Ross design, so the rough’s all look a bit like the desert but what fun!  The starter told us that here was indication as to where the pins were located on the greens, information almost every golf course gives information on.  He told us to just target the center of the green and play from there.  A signature feature of a Donald Ross course is that the ball will tend to roll off the green if hit to any side of it.  Pinehurst 2 is the greatest example of this, hence the advice to aim at the middle!  Nothing short of just a great golf experience.

The next four days the girls and Bob were practicing or playing in the North South Senior Golf Championship.  Along with the Senior, there is a Super Senior that Janice played in.

While the competition was going on, Dave and John played some of the other Pinehurst courses 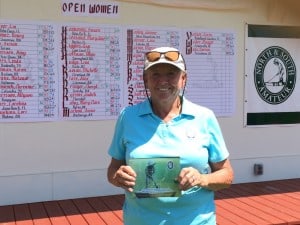 including going over and playing Mid-Pines Golf Club in Southern Pines, another Donald Ross course.  John had fond memories of playing golf at Mid-Pines with his mother Jean and good friend Tim Clark from Greensboro.

After many great days of golf by all, Janice finished in 5th place in the Super Senior Division with a 76,77,79.  This made for a wonderful ending to our Pinehurst adventure.

Niagra Falls and Niagra On The Lake

Friday morning we started the drive from Pinehurst to Niagra Falls with our destination somewhere along Lake Erie for the night.  We actually made it to Buffalo and stayed near the airport, good rates for a Friday night.  In the morning we drove to Niagra Falls.  Having visited the falls on a previous trip we decided to take in some of the local history.

Old Fort Niagara. The station was established by the French in 1679 and in 1726 made it a permanent fortification building the “french castle”.  The fort was occupied at one time or another by the French, England and the United States. The Five Nations of the Iroquois were militarily and politically the most powerful group of native people in American history. They traded with the French and the British and remained neutral.  As France moved more troops and built more forts towards the Ohio River, the Iroquois became aligned with the British which lead to the French Indian War.   In 1759 the British gained control of the fort.  The British yielded the fort after the American Revolution by treaty to the United States in 1796. In 1813 the British regained control of the fort. The fort was again yielded to the United States in 1815 after the War of 1812. It is quite a site right their on Lake Erie.

The central house was designed, by the French, to be impregnable to native indian attack. It included all the facilities necessary for a garrison – quarters, storerooms, a well, and even a chapel. DeLery’s “house” survives today, known by its more romantic name, first used in the nineteenth century – the “French Castle”

We left the fort and headed over to Niagara Falls Country Club located in Lewiston, New York.Our golf professional Mike Boss, at The Riv, called his brother, John who is the head golf

professional at Niagara Falls Country Club and asked if we could play the course, John was very gracious and welcomed us to play.  There was a club tournament being finished up and we went to the tenth tee.  As we approached the tee a gentleman was by himself and we asked if he would join us.  This was a wonderful chance to play with “Vinnie”, who introduced himself as Vincent O’Malley.  As we played we found out that “Vinnie” was Father O’Malley, the Chaplain at Niagra University.  What a pleasure and we hope we have the opportunity to meet again,  He certainly made an impression on John’s language when he missed a shot, it bought a smile of humor to Janice’s face.

The course was beautiful and a good test of golf. When we completed the round  we met John and Laura Boss.  They gave us a great tour of the club. The views from the main clubhouse are amazing! They were wonderful and we hope to see them when the visit Mike this winter. 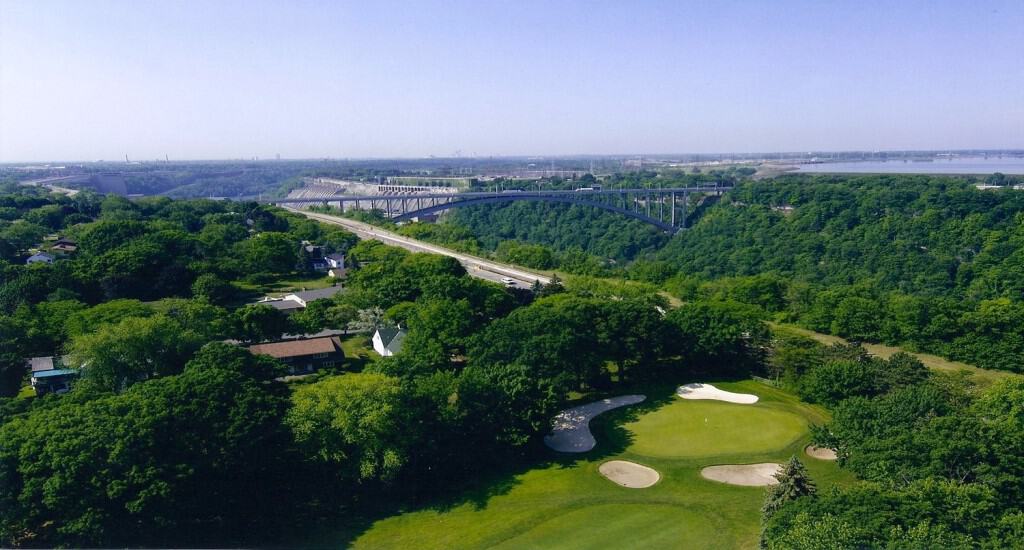 Niagra On The Lake, Ontario 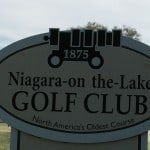 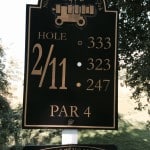 Lake and vowed to return.  It is a beautiful small town that over looks the lake.  We scheduled a morning round of golf at the Niagra On The Lake Golf Club.  A nine hole course that is the oldest course in North America, built in 1875.

A little history:  The Niagara On The Lake Golf Course had the distinction of being host to the first ever-international tournament held in North America. That event – the Niagara International – was held September 5-7, 1895.

Isn’t fun to think you could outdrive this legend in golf almost any day!!

We carried our golf clubs and played the course twice for the 18 holes.  The weather was perfect and the course was lovely with great views of Lake Ontario. If you are ever in Niagara on The Lake make it a point to play 9 holes at this golf course and lunch on the patio.

That evening we stayed at the Harbour Inn in Niagara On The Lake.  It was lovely and we enjoyed wine tasting before dinner.  We strolled up to the main village and had a nice light dinner outside with a bottle of local wine.  After a good night’s sleep, the Inn served a delightful breakfast.  It was time to move on to our next adventure.

Canadian Women’s Mid Am and Senior Am Golf Tournament

Off we headed to Camlachie Ontario Canada to the Canadian Women’s Mid Am and Senior Amateur Golf Tournament. The tournament was at a resort named Saw Mill Resort and Spa.

Janice had located a B&B called “Thru Windows Past” in Forest,Ontario, about five miles from where the golf tournament was being played.  The home was absolutely beautiful and restored to the period, 1893, when it was built.  Glen and Joy, the owners, could not have been more hospitable.  While this may be off “the beaten path” for many, our room was spectacular; coffee and tea just outside in the hall with home baked cookies each afternoon. Forest is a wonderful farming area with much history.  Just a few miles off Lake Huron it reminded us of one of our midwestern farm towns in the United States.

The golf course at Saw Mill Creek Golf Resort was a good layout and in excellent condition. 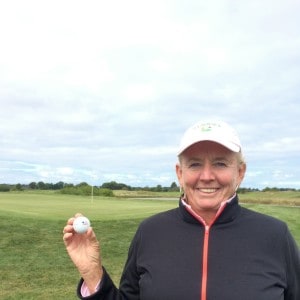 Janice got a good practice round in on Monday and was looking forward to the competition.  Tuesday was a good round with a 79.  Day two started out fairly well, but she felt a little off her game.  Getting to hole number nine, she felt better about how she was hitting the ball.  Well, nothing can excite you more on a par three when you see the ball going towards the pin!  What is better, is when it drops in for a Hole in One!!  This is Janice’s 7th.  She finished with a 77 for the day.  That ended the Super Senior, two day event but her combined score put her in 13th place for the final 3rd day round making the cut off of 70 players.  The third round was not to be a few errant shots and “out of the money”. 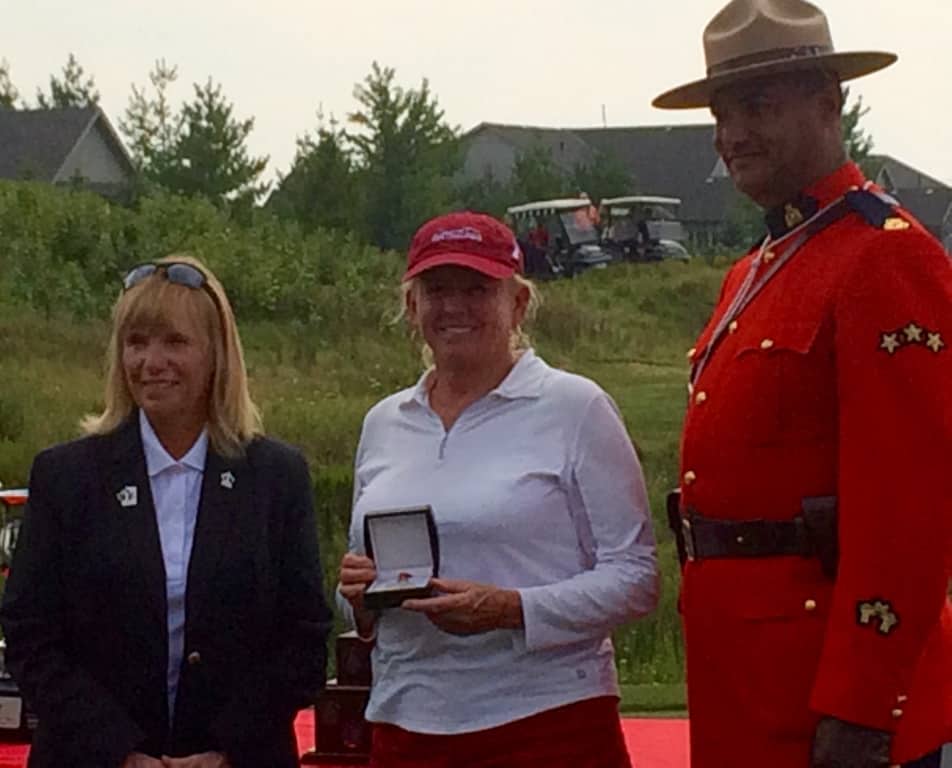 With the tournament over we quickly left Sand Mill Creek and  headed to Muskegon, Michigan to catch the ferry to Milwaukee the following morning to visit our good friends Pete and Bunny Warenski from our New Zealand and Australia trip this last January and March.

The golf was fun and Janice finishing in 5th place at Pinehurst and 2nd Place at The Canadian Super Senior made for an eventful summer.