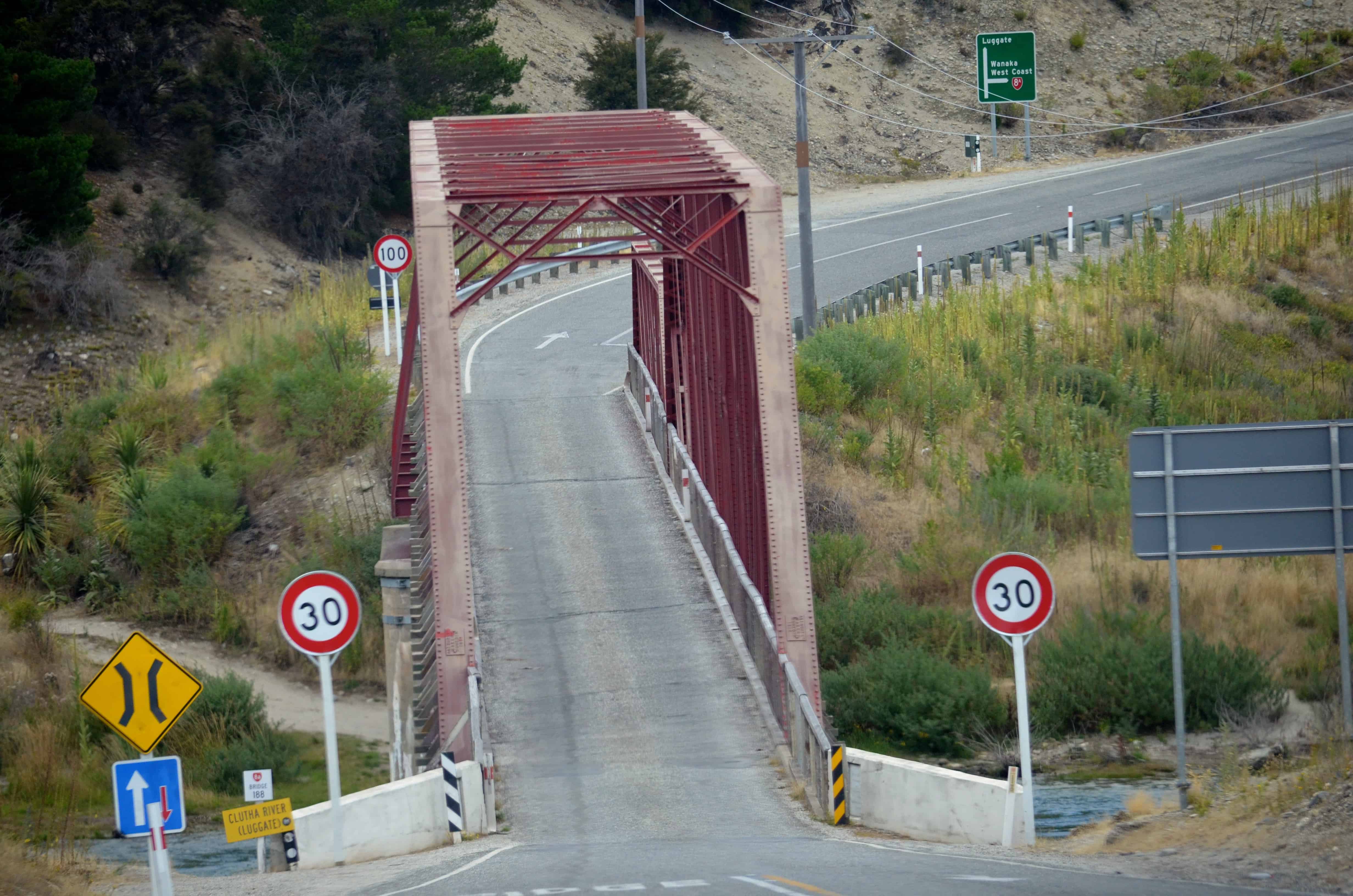 We came down into the valley to our final destination in New Zealand, the Millbrook Resort, just outside the city of Queenstown. The one lane bridges can be a challenge, you must watch to see if you have right of way depending on the arrows. It takes queueing to its highest level.

We checked into the resort, our two bedroom cottage was ready right on the golf course. 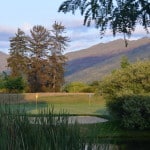 It was a beautiful stay and the views of the course were lovely.
It was Pete’s birthday on the 6th so we let him decide on plans for dinner as we wished him a Happy Birthday.  He wanted dinner in, so Janice and Bunny went to the store and picked some things up. 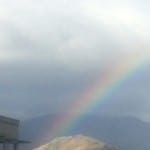 On the way back from the store they saw the most beautiful rainbow. Bunny and Janice put dinner together along with much wine and we had a feast!  We took to our rooms for sleep and golf the next day at Jacks Point.

We wanted to visit Milford Sound. It is a four hour drive each way, or you can fly, which makes more sense.  If you fly, weather is a factor, which means you might get there and not get back for possibly days!  Our schedule was too tight to allow that scheduling.  Will plan for a return trip.

Queenstown is located on the north shore and eastern end of Lake Wakatipu with many shops and restaurants. 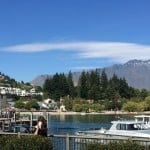 There were folks selling  crafts along the lake front and we stopped for a glass of wine to watched the sites and frankly “people watched”!.

We returned to  the resort, only 20 minutes away and headed out for dinner in Arrowtown, just outside the resort.  The tapas restaurant , La Rumbla, was recommended by Stephanie at Lake Tekapo Lodge. The food and service was outstanding, do not miss this restaurant if you are in the Queenstown area. We sat at the bar and met Henry, a new bartender from England. He had graduated from university and like many young people we met, was traveling the world, doing various jobs, before returning to London for his career.  Henry introduced us Blue Duck vodka made in New Zealand, it is fantastic, we are all carrying a bottle home..

The next day was a day off to do whatever, Bunny and Pete decided to take the scenic drive up to Glenororchy.  We decided to play golf at the Millbrook Resort course. They didn’t have a tee time for us and were fully booked, 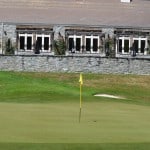 John had a nice discussion with the assistant pro managing the pro shop , he was from Georgia, and was able to get us into a “starters time”.

John’s sale skills still come in handy! We had a great day and picked up lunch to go (called “takeaway”) at the Hole In One
restaurant

and went back to the cottage. We received an email from Will, our trip organizer from Playing Around New Zealand.  We had made an error on our schedule and had an extra day in New Zealand.  Given the choice of spending another night at Millbrook or an extra night at the Auckland airport, Millbrook won out!  We left the arrangements up to Will who took care of everything and got us to stay and extra day at the resort and changed our Queenstown to Auckland flight and change our hotel room at the airport, he jumped right in and saved us!

We decided to play 18 more holes at Millbrook., (If you stay there and pay for a round, it is good for all day). After completing the next 18 we stopped at the Concierge to see if we could get reservations at Kobe 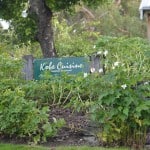 ,
the Japanese restaurant. When we were in Queenstown, the lady at the information booth told us Millbrook had the best sushi anywhere in Queenstown. The lady was right it was a beautiful dinner and we again had fresh lake salmon, we are not sure if will ever be able to eat salmon in the U.S. again.  Just joking, Alaska salmon is still some of the best in the world!

The next morning we were scheduled to play The Hills. It was pouring down rain and the grounds were puddled but we decided to go to the course to at least get our options. We arrived at the gate, unmarked, and no one answered to we turned around and headed back to the cottage. Upon returning, Janice found a voicemail from Will saying he had been contacted by the course and it would be closed until the afternoon and only walking would be allowed. We all discussed it and because of Janice’s hip and frankly our ages we would not walk the hilly course and asked Will to see if he could schedule it for the next day. The Hills could not accommodate us so we  Will offered a refund.  We were all disappointed.

After the skies cleared, we headed to Queenstown and the Kiwi Birdlife Park. 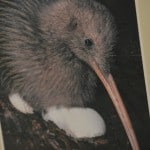 This is a conservation effort to breed Kiwi’s as strong as possible using DNA testing to match mates. Since the Kiwi bird is nocturnal they keep the viewing area very dark with only some special lighting so you can view then during the feeding. We were not able to take pictures but these are amazing birds. Once a chick is born, the Kiwi egg is the size of an ostrich egg, they keep the chicks for 6 months before releasing them into the wild. We walked around the park and saw other native species to New Zealand and then went to a presentation to learn more. They showed us other birds

and reptiles and told us stories of the mammal predators that have been introduced into New Zealand, like the possum from Australia, that kill the Kiwi. The worst of these is the possum. The nature person told us we should all purchase possum items, they sell passum jackets and scarfs that are mixed with wool., They told us to try and hit them on the roads as we drove, joking that they may be the first conservationist that ask you to kill an animal!  To put this into perspective there are 40M sheep in NZ and 80M possum, Yikes!. 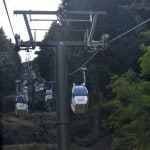 that took us up to one of the highest points in Queenstown. It had magnificent views, a little cool, we had some coffee and tea. There was this magnificent rainbow we caught from the top, it was magnificent. 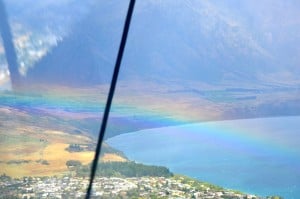 We walked down to the town to do a little shopping . Pete and John had fallen in love with the “All Black”, that is the New Zealand Rugby team that is loved in the country.  One of the things they do is a short tribal HAKA before the games so Pete and John had to try and be one of them in front of an All Black poster.

We purchased a few items in town then headed back to our cottage. That evening we went to the other restaurant that Stephanie had recommended in Arrowtown called Saffron’s. While the food was excellent the service was not stellar.

Since we had another day to play golf, we knew that if you played Jack’s Point a second time within 15 days the play was half priced so we made a reservation for 8:12 am. We headed to the course in the morning it was a bit chilly to start but after about 5 holes the sun was bright and it was a great day. We had a fantastic lunch at the club and then headed to the airport for our flight to Auckland. We would stay overnight at the airport before heading to Adelaide to start our next adventure in Australia.