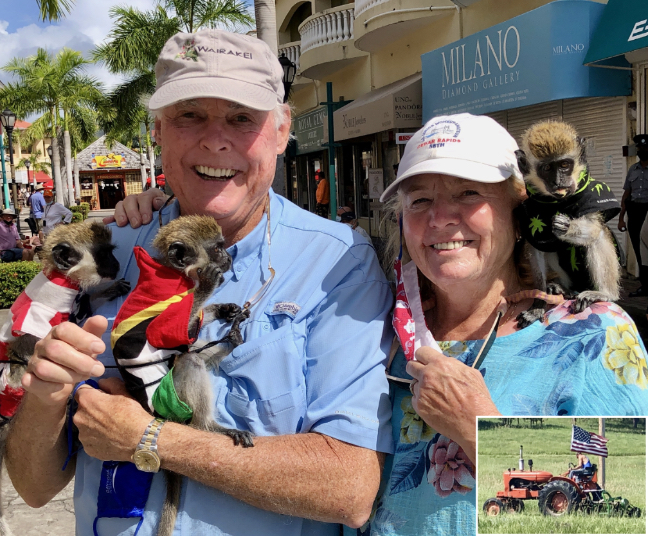 Roadtrip for Golf in Mississippi

It has been a while since we have been away so here is our first in about a year. We decided we needed a golf vacation and who better to do that trip with than our friends Pete and Bunny Warenski. We played golf in New Zealand and Australia in 2015, as well as playing the courses on the Robert Trent Jones trail in Alabama a few years earlier,  so it was time for a short adventure.

We left early Sunday morning and heading to West Point, Mississippi, our first golf destination. Instead of driving the full 12 hours, we stopped in Troy Alabama.

The campus was a beautiful drive and we enjoyed just sitting down by the lagoon and watching the activity on the water.

We checked into the Econolodge, it had been highly rated but we now recognize that ratings don’t mean anything with lower-priced lodging. The RV was always rated high in our minds.

We checked into the Econolodge, it had been highly rated but we now recognize that ratings don’t mean anything with lower-priced lodging. The RV was always rated high in our mind

Monday morning we headed for West Point, Mississippi, and drove into Old Waverley Country Club.  It bought back memories when Janice played in the  USGA Women’s Mid Amateur in 2006 which was played at Old Waverley.

Old Waverley has a sister course called Mossy Oak Country Club, they are known today as The Golf Clubs of Mississippi. Mossy Oak was designed by golf course architect Gil Hanse. This was his first new golf course design since he designed the golf course in Rio de Janeiro for the 2016 Olympic games.

We met up with Pete and Bunny and went to check in.  They had us stay in the cottages on the Mossy Oaks golf course.

The cottages have four large bedrooms with a magnificent common area with the conveniences you need like: TV, ice machine, coffee machine seating, and dining areas. The back porch overlooked the 10th hole of Mossy Creek and was a great place to sit with a cocktail when the sun was setting.

After resting a bit, and of course, John went to hit golf balls, it was time for dinner. Monday in West Point most of the restaurants including Old Waverley are closed,  but the Tin Lizzy in West Point was open so we headed into town. This was a cute restaurant and the southern food was delightful. Our waitress was adorable and we started talking with her. She was going to be a senior in high school and works three jobs to save enough money to go to college. She was a foster child until her aunt and uncle were able to adopt her a short while ago. Nothing stopped her, we don’t know if she even knows the word “I can’t”.  A true American Story in the making

The next morning it was off to play Old Waverly We drove up the way to the Club House and what a beautiful entry. We went into the bar area for breakfast and sat out on the porch, it was a lovely morning. It had been raining for many days in the area and they had not been able to mow until Tuesday when we were playing, so they were working hard to t the course in shape. With all that going on the course was a delight, a very fair test of golf but you need your “A” game to tackle it.

We completed the course and drove down 18 towards the clubhouse, what a finishing hole! Of course, we could not resist pictures at the Old Waverly Chair just off the 18th green.

That evening we had dinner at Old Waverly in the downstairs bar, good food and drinks, then back to the cottage. The next morning we began our day with breakfast at Old Waverly and then went to play Mossy Oak.

When the Mossy Oak golf course was conceived, it was a large piece of land described as Black Belt Prairie. The rich black soil is surrounded by large forests that when viewed from outer space stand out.

Before farmers discovered the soil’s fertility, the Black Belt was primarily prairie. According to Hill, about 356,000 acres of prairie were documented in the Black Belt in the 1830s. Estimates suggest that less than 1 percent of these prairies remain today. Find a remnant of the Black Belt prairie, Hill notes, and you could see some of its unique grassland birds; more than 200 species of plants, 1,000 species of moths, 107 species of bees, 33 species of grasshoppers, and 53 species of ants. JoVonn Hill of Mississippi State Universi

The goal was to create a golf course without changing the contours of the landscape. The various items above are part of the landscape and it is sensational. The beauty’s hard to describe. The golf industry fell in love with the course, in 2017 Golf Digest called it the number three best new course in the country. Both Golf Digest and Golf Week rate it in the top 100 modern courses. It is rated the 2nd best course to play in Mississippi.

Playing the Mossy Oak golf course is a tremendous experience.  There are many tees, so you can be as challenged as you want.  Some of the holes actually share fairways and it certainly can confuse you when you think someone is hitting at you.  The beauty of Mossy Oak enhances your experience with the use of conservation techniques in the landscape.  It is what their tagline says, “Natures Golf”.

We enjoyed a wonderful round of golf with many challenges.  The course was one of the finest we have had the pleasure to play.  It was so different, not a links course, but probably like the early courses in Scotland where the landscape was the course. Looks much like this Scottish course!

We finished and drove back to Old Waverly to enjoy lunch and checkout.  Our drive to Philadelphia took several hours.

Our next stop was the Dancing Rabbit Golf Courses, part of the Pearl River Resort, near Philadelphia, MS, one of many owned by the Mississippi Band Choctaw Indians.  The Choctaws have over 35,000 acres of land in ten Mississippi counties.  There are over 11,000 members of the tribe and provide 5,000 jobs to members and other employees. Dancing Rabbit has a large inn and golf pro shop and is next door to the Pearl River Casino.

The Choctaw Indians were originally from Mississippi. but most of the tribe was marched west of the Mississippi River under the 1830 Indian Removal Act along with the Cherokees, Creek, Seminoles, and Chickasaw Indians at gunpoint.

A little History
The Trail of Tears was the forced relocation of over fifty thousand Indians. This included tribes such as the Cherokee, Chickasaw, Seminole, Creek, and Choctaw, among other tribes. These Native Indians were uprooted from their homes, put into detainment camps, and then forced to march nearly one thousand miles from their homelands west of the Mississippi River to the land that was designated to be “Indian territory” in what would be present-day Oklahoma.

Over four thousand of the sixteen thousand Cherokee Indians lost their lives along the way, while three thousand five hundred of the fifteen thousand Creeks died, seven thousand Choctaws, about eight hundred Chickasaws, and seven hundred Seminoles died from dismal weather, disease, and exhaustion. The Cherokee Indians came to call this journey “Nunahi-Duna-Dlo-Hilu-I” which translates to “Trail Where They Cried”, which was eventually was shorthanded to “Trail of Tears”. Britannica, The Editors of Encyclopaedia. “Indian Removal Act.” Encyclopædia Britannica. December 06, 2016. Accessed November 28, 2018. https://www.britannica.com/topic/Indian-Removal-Act.

There are numerous places to stay at the Pearl River Casino, the Dancing Rabbit Inn or if you are lucky there are 10 rooms in the clubhouse, we were lucky and it was a treat.  The balcony overlooked the driving range and was perfect for evening cocktails.  In the morning we rolled out of our bed, down the stairs for breakfast, and into our golf carts ready to hit a few balls and play golf.

The two golf courses are beautifully tucked away among the towering pines and oak forests. Both courses were created by acclaimed golf course designer Tom Fazio and PGA great Jerry Pate.

“The Augusta you can play”    Golf Magazine

They take up over 700 acres with over five miles of meandering spring-fed streams making an ascetically pleasing setting while enhancing the difficulty of play.

The first course we played was “The Azaleas Course”.  GolfWeek rates it the 8th best course in Mississippi, and it is well deserved.  It wanders through the pines and the planted azaleas did remind you of the views of Augusta when you watched the Masters!

Phillip M and the Casino

We made reservations for dinner that evening. One of the advantages of staying in the clubhouse, they provide golf carts with headlights. We picked ours outside the clubhouse and followed the trail to the Pearl River Casino. When we arrived, they actually had reserved parking places for the golf carts.  “Phillip M” in the casino was recommended to us for dinner as the best dining in the south.  It was just OK, but a nice experience.  We passed on the gambling and returned to the clubhouse for a few drinks on the balcony.

The next morning we had a tee time and played “The Oaks”, it is equally as charming and challenging as The Azaleas. GolfWeek rates it the 5th best course in the state and what a treat to play. It was the better of the two courses.  A great day of golf.

Our plan was to stay one more evening up at The Dancing Rabbit Inn and depart in the morning.  Pete and Bunny were heading back to Chicago and we were going to Biloxi to play Fallen Oaks Golf Club.  The big news on the television was the big tropical “Named” storm heading to Biloxi, with words like “CATASTROPHIC”!  We changed plans, said our goodbyes to Bunny and Pete, and headed southeast for the Florida panhandle and home to Daytona Beach.  We did not anticipate that motels would all be full…YIKES…we drove much longer than we wanted and finally got a room for the night, as it turned out it was just past Troy where we stayed on the way to West Point, too funny!

Two wonderful days of golf at Dancing Rabbit and two at Old Waverly and Mossy Oaks. Could not say enough about what a pleasure both locations were. Of course, spending time with our friends Pete and Bunny was wonderful and we look forward to doing it again soon.