On to Montgomery where we played at the

Capital Hill Robert Trent Jones golf courses. Staying at Gunter Hill Park a National Campground that was built by the Army Corps of Engineers as part of the effort to solve problems with the Alabama River around Montgomery. The campsites were right on the waterfront of backwaters to the river. The fishing is suppose to be excellent. 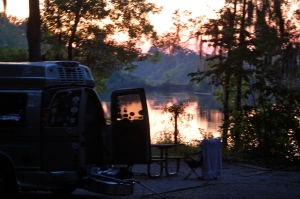 Our many thanks to all our taxpaying friends as the cost was only $16 per night including power, water and clean restrooms and showers! The first nigh Pete and Bunny had a propane leak, fortunately outside, so the first order of business in the morning was taking their RoadTrek to have it fixed.

We then headed over to the Capital Hill complex to play our first round on the Legislature course.

They categorized it as a more traditional course which plays in and out of pine trees and along a bluff. It was a wonderful course to play.  It was an interesting round as we were delayed at the end of the third hole because of lightning. After an hour we returned and finished the seventh hole before another lightning stoppage. Since we had to pick up Pete and Bunny’s Roadtrek by 5:00 we got a rain check to complete the round after one of the other rounds. John and Bunny were leading in the match against Pete and Janice.

We got up the next day and Bunny complained of a gas leak again, Pete told her it was just “Swamp Gas” and not to worry!

On to the RTJ courses. You can have all the “Judge” jokes you want, but that was the course for the second day! “You be the Judge”; “The course will Judge you”, or any combination. We to the starter on the bluff that overlooked downtown Montgomery. Below was the “Judge” with the Alabama River’s glistening backwaters. The stunning vistas of the course unfolded before your eyes. The first tee sits 200 feet above the fairway overlooking the layout that Robert Trent Jones wanted to make a nightmare for your start of the round. The fairway had a middle crest any any ball either left or right either went in the cypress swamp or the water on the right!

The course had 14 holes adjoining the water and a stunning bulkhead island green, it was long and difficult, but the most fun of the three courses at Capital Hill. The Judge is described as simply magnificent, it is and The Judge takes you to your knees! After golf and a few beers we decided on cooking some local seafood for dinner, Catfish! We had a great meal, the fish was great and we retired for the long day of golf coming up. John and Bunny won the match over Pete and Janice.

We headed back in the morning for a long day of golf at the Capital Hill complex to first play the Senator and then finish the Legislature match. The Senator is a Scottish-Links style course with beautifully manicured bent grass greens, holds over 160 pot-hole bunkers and mounds 20 to 40 feet in height. The secluded settings of each hole makes you feel as if you are the only foursome on the course. The Senator will host the Navistar LPGA Classic in September. Back to the Wilson’s vs. the Warenski’s. The match ended in the firs tie, so a half point to each player. With that match finished, it was back to the 8th hole on the Legislature to complete the rained out round the first day. The 8th and 9thholes were great playing above the Alabama River which was outdone taking in the views riding down the “Sky Bridge” to the back nine looking over the native cypress swamps, which lined many of the fairways the last several holes took you back up to the bluff and played back into the clubhouse.

The Legislature was a wonderful course and one of our favorites. Needless to say we were beat after 29 holes of golf. Bunny and John held on to win the match. Point standings after finishing in Montgomery were: Bunny 6.5, John 7.5, Pete 4.5, Janice 2.5.

What a trip so far. The Warenski’s have been an absolute pleasure to travel with. The golf has been a blast and the handicaps have made the competition really fair, Janice having the lowest handicap has been disadvantaged by all the strokes given to the other players, but that is the game of golf.

We left Montgomery and headed out to Mobile for our last two rounds on the Robert Trent Jones Trail. Magnolia Groves.

The property includes creeks, marshland, and lakes, with each of the 54 holes carved from a thick forest of hardwood and pine. Magnolia Grove was recently voted into Golf World Magazine’s Reader Choice Top 50 Public Courses. The Falls and Crossings courses were also named by Golf Digest’s Places to Play as two of the nation’s Great Value courses, and both courses were listed in America’s Top 50 Affordable Courses.The Crossings course plays host to the Mobile Bay LPGA Classic held each in April. We first played the Crossings as the last match between the Wilson’s and the Warenski’s. Pete and Bunny beat the heck out of us leaving us three down with three holes to play. The Wilson’s won 16 and 17 to be one down and Pete and Bunny nailed the coffin closed by winning the 18th hole, winning two up. The Crossings course, which doubles across railroad tracks, is a shot maker’s layout. The course was renovated in 2009 with newly designed green complexes and extensive tree removal. Several holes were entirely redesigned with new water features, including the par-3 fourteenth hole. The course was a pleasure to play.

We ended all the match events with the last round to be played Saturday morning on the Falls Course. The last day was to be individual play with the net score determining the points to be awarded. First-4 points, Second-3 points, Third-2 points and Fourth-1 point. Anyone could win, with unfortunately only Janice, mathematically out-although even with the lowest handicap, she could win the Individual! Standings: John and Bunny 7.5 points each Pete 6.5 and Janice 2.5. Off to the Falls Course, The Falls course is characterized by large, liberally contoured greens and massive, cloverleaf bunkers.

On the 10th, a 570-yard par five and possibly the best strategic hole on the course, a waterfall cascades just beneath a contoured green that falls eight feet from front to back.

The course was a pleasure to play. Janice won the Individual shooting a 78 from the men’s white tees, what a great round of golf and a well deserved win! Peter was second, and John beat Bunny by 1 stroke for third. This left the final results with John winning 9.5, Bunny and Peter had 8.5 points and Janice 6.5 points. What a great ending to 13 rounds of golf over some magnificent courses.

Our campsite in Mobile was the Meaher Alabama State Park This 1,327-acre park is situated in the wetlands of Mobile Bay and is a day-use picnicking and scenic park with modern camping hook-ups and bathhouse facilities for overnight visitors. A boat ramp and fishing pier appeals to every fisherman. A self-guided walk on two nature trails includes a boardwalk with a up close view of the Mobile Delta. The wildlife was sensational including the alligator checking out the campers for a morning meal! 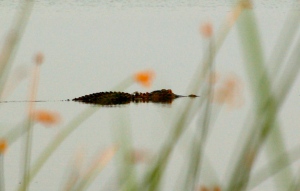 We enjoyed a few evenings of sunset cocktails and the last night had dinner at one of the local beach restaurants, Felix, which YELP and locals rated very highly. As the sun sets over Mobile, Alabama, we say goodby to the Robert Trent Jones Trail.

We had no idea how our trip would turn out, we were excited to play the courses and use our RoadTrek as the “Hotel” and “Restaurant”. The trip was beyond our expectations, we had a blast with Pete and Bunny playing golf and sharing the evenings. We are planning to do another state in the future, such as Missouri or Louisiana. It is always sad to end an adventure, but heading home for a few weeks was a great feeling, especially with the storm brewing in the Atlantic headed for northern Florida. We spend Sunday on the road, arriving back in Flagler Beach in time to see the ocean waves crashing into the pier. Once in the house and turning on the TV we saw reports on the national news about the major storm hitting Flagler Beach with pictures of our local pier. It is funny what a joke these weather “shows” are! We are fine, little rain and wind, but no loss of power.

Stay tuned for our summer adventures. We are home for a few weeks and then head up to Gettysburg for our son James’ wedding to Mary Albin and then on to eastern Canada.